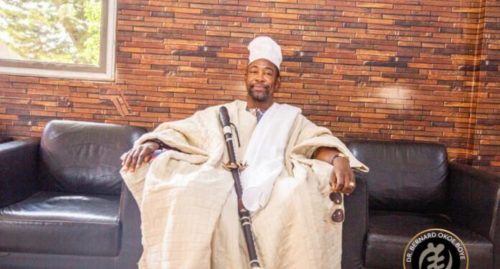 The Chief Executive Officer (CEO) of the National Health Insurance Authority (NHIA), Dr Bernard Okoe-Boy, has been installed as a Health Development Chief in the Dagbon Traditional Area.

This was during the former Ledzorkuku Member of Parliament’s visit to the Northern Belt which commenced on November 28, 2022.

He took to his Facebook page to announce the honour and expressed gratitude to the people of Tamale and pledged commitment to deliver on his mandate continuously.

“Leadership be it political or traditional has one objective; to improve the lives of our people. I strive to achieve this, be it in the North or South,” he wrote.

Dr Okoe-Boye on June 13, 2022, commenced a nationwide working tour of the 16 regions and has so far visited the Greater Accra, Eastern, Western, Ashanti, Volta, and Oti Regions.

The visits form part of efforts geared towards re-energizing, restructuring, and repositioning the NHIS which remains Ghana’s leading vehicle to attain Universal Health Coverage by 2030.

The CEO’s vision is premised on digitalisation, dissemination, decentralization, development and data as NHIA prepares to mark its 20th anniversary in 2023.