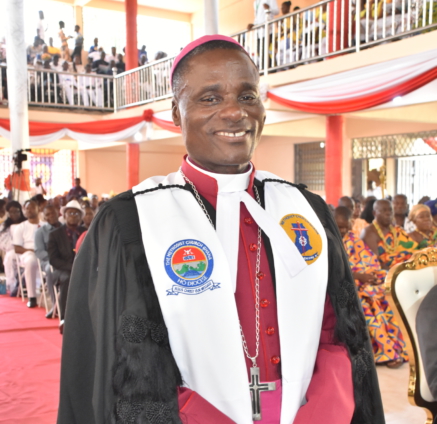 A former fetish priest has been inducted as the Bishop of the newly inaugurated Ho Diocese of the Methodist Church of Ghana.

Rt. Rev. Matthew Zikpi was deemed a qualified candidate after he denounced idol worship and rose through the ranks serving the church.

He was initiated into voodooism by his uncle in 1973, during his days as a pupil teacher at Asiana in the Ashanti Region.

He became the Deputy Chief Fetish Priest of the Alifia Shrine in 1978, learned the skill of palm wine tapping and distilling of local gin.

No one has ever defeated him in an alcohol-drinking competition, as he was able to consume large volumes of alcohol without getting drunk.

After several attempts by his elder brother, he denounced his deity, gave his life to Christ in 1984, relocated and joined his elder brother at Assin Atwereboanda where they fellowshipped with the Methodist Church.

He was warned against the repercussions of denouncing the gods when he returned all his belongings. He was determined to follow Jesus Christ although the warnings manifested.

Rt. Rev. Zikpi was commissioned into the Ordained Ministry of the Methodist Church in 2001, after he obtained a Diploma in Ministry certificate from the Trinity Theological Seminary and a Theology Certificate with distinction from the University of Ghana, Legon.

He was ordained as a Minister in 2004 and served the church in several capacities leading to his induction as the Bishop of the newly inaugurated Ho Diocese.

Rt. Rev. Zikpi said his new role presents an opportunity to extend hope to people and expand the Methodist Church across the Volta and Oti Regions to win more souls for Christ.

He outlined the planting of churches and positioning of a minister in areas where their services are needed and human resources development as part of his strategies for achieving his objectives.

Presiding Bishop of the Methodist Church Ghana, Most Rev Dr Paul Kwabena Boafo, described his life as a big testimony.

He said Rt. Rev. Zikpi depicts the salvation that awaits unbelievers in Christianity and urged them to give their lives to Christ.

“If you can not find anything at all, the Bishop of Ho Diocese is a testimony that if you can come to Jesus, your life is transformed”, he said.

He used the opportunity to urge persons in leadership positions to serve their followers and not their personal interests.