NDC polls: We voted against Ofosu-Ampofo for his ‘love affair’ with NPP – Yamoah Ponko 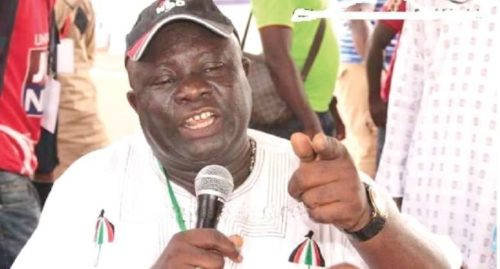 A former Municipal Chief Executive (MCE) of Ejisu-Juaben Municipal Assembly in the Ashanti Region has assigned reasons for the defeat of the former National Chairman of the National Democratic Congress (NDC), Samuel Ofosu-Ampofo, at the Saturday, December 17, 2022, National Delegates’ Congress held at the Accra Sports Stadium.

According to Afrifa Yamoah Ponko, the delegates voted against the outgone National Chairman because of his dealings with some elements in the governing New Patriotic Party (NPP).

He stressed that delegates were just not enthused about the administration of the outgone chairman.

“And the delegates were resolved to show him (Ofosu Ampofo) the exit,” he stressed.

“We vehemently registered our protest against his administration by massively voting against him,” he said.

“Some of us knew he (Ofosu) was going to lose to the current Chairman,” he added.

He noted that delegates were not ready to forgive the outgone chairman for the harm he had caused the party in the 2020 general elections.

He explained that the delegates were angry with the former National Chairman’s mismanagement of the party.

He accused the previous NDC administration under the watch of the outgone National Chairman of hobnobbing with the NPP.

“At the congress grounds, delegates were just waiting for the whistle to be blown by the Electoral Commission for them to vent their spleen on Ofosu-Ampofo’s administration,” Mr Ponko claimed.

He said the vote against Ofosu-Ampofo was a protest vote against the way and manner the chairman, handled the affairs of the party.

The former MCE and a stalwart of the party in the Ashanti Region assigned the above reasons to the National Chairman’s defeat while speaking in an interview with Odehyieba Kofi Essuman, host of Accra 100.5 FM’s Ghana Yensom Morning show on Monday, December 19, 2022.

He said at the grounds, delegates made it clear they needed a new direction for the party going into the 2024 general elections.

He said that many of the delegates held the view that the NDC won the last elections but victory was snatched from the party because of the ineptitude of some officers of the party.

“Some of these officers failed to live up to the expectations of delegates,” he argued.

NDC polls: We voted against Ofosu-Ampofo for his 'love affair' with NPP – Yamoah Ponko 2022-12-19
admin
Share

Tags NDC polls: We voted against Ofosu-Ampofo for his 'love affair' with NPP – Yamoah Ponko