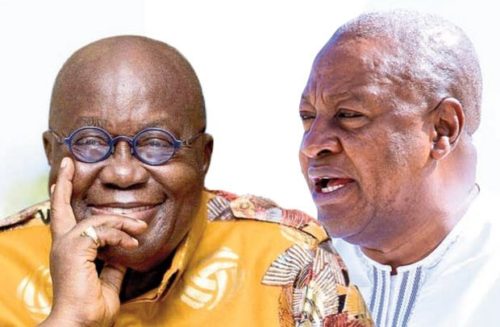 The National Democratic Congress (NDC) appears to be on a collision course with the ruling New Patriotic Party (NPP) over which political administration has completed more of the 124 Community Day Senior High School building projects, christened E-Blocks.

According to the NDC, the government is in a “futile effort to distort” the record of the Mahama government by “deceptively reclassifying” some completed E-Block projects as uncompleted, thereby reducing the total number to 29.

In a statement, the opposition party said the handing-over notes of the former Minister of Education under the Mahama government, Prof. Naana Jane Opoku Agyemang, bears out that the NDC completed and commissioned 46 out of the 124 Community Day Senior High Schools it initiated.

“This was widely reported by the media. The internet never forgets,” the NDC stated, rekindling the infrastructure-obsessed debate that gripped the nation during the 2020 general election due to an extraordinary move for political opportunism.

The NDC claimed that each of the Community Day Senior High Schools had an ultra-modern library, furnished classrooms, ICT laboratory, Biology laboratory, Physics laboratory, Chemistry laboratory, General Science laboratory, a school bus for students and a pick-up vehicle for office staff among others.

“Interestingly, the first Minister of Education of the Akufo-Addo/Bawumia government, Mathew Opoku Prempeh, is on public record to have said in 2017 that the NDC/Mahama government completed 46 Community Day Senior High Schools,” it stressed.

The party said a so-called reclassification by the government was largely done on the “contrived and flimsy grounds” that some of the 46 completed E-Blocks had no furniture, even though the physical structures had been fully completed.

“The attached document (stamped fake) being circulated by hired NPP apologists on social media is a product of this warped thinking and should be treated with utmost contempt,” the NDC said.