NDC Chairman vows to facilitate win for the party in 2024, seeks delegates’ endorsement in the upcoming party elections 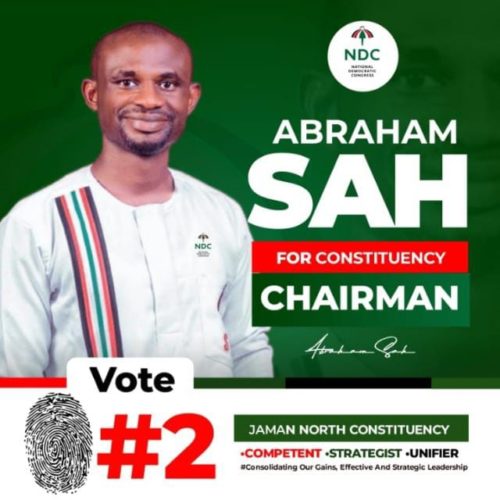 The Incumbent NDC chairman in the Jaman North constituency of the Bono region, Mr. Sah Abraham has pledged to secure victory for the party in the 2024 general election for both parliamentary and presidential when given the mandate to serve the party in his second term.

Speaking in an interview with Yankee FM morning show Host, Odiakopa Afram Denkyirahene monitored by Kwaku Mensah Abrampa, the chairman denoted that most of the promises he made to the delegates and the party fraternity during his 2018 chairmanship campaign are 90 percent achieved indicating that he maintained the unity and peace needed by the party to secure success, also through his effort as chairman with other executives, the party was able to recapture their lost seat in the Jaman North constituency during the 2020 general elections and subsequently won the presidential elections in the district.

He pleaded with all delegates in the District to endorse him by voting for him massively to ensure victory for the party in the 2024 general elections both the presidential and parliamentary seats stressing that he did it some years back and can do it in the coming years.