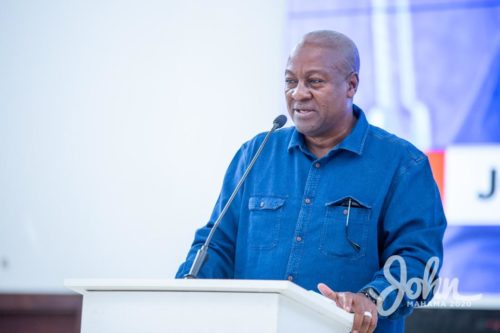 Former President of Ghana, John Dramani Mahama has issued a barrage of stern warnings to candidates vying for positions in the National Democratic Congress (NDC).

He says he has no interest in who occupies what position in the political party.

Rather he is focused on winning the 2024 election by working with people who are voted into positions in the political party by delegates.

John Dramani Maham made this known in a statement he shared via his social media pages.

He asked aspirants to take his name out of their campaigns and rather focus on telling delegates what they can do for the political party.

The NDC goes to the polls on December 17 to elect its National Leaders to steer the affairs of the political party ahead of the 2024 elections.

Former President John Dramani Mahama wishes to once again caution, in the strongest terms, aspirants and their campaigners who deliberately continue to associate his name with their campaign.

As has been publicly stated by Mr. Mahama, he has no preference and has not endorsed any candidate in the ongoing NDC national executive elections, which climaxes on Saturday at the 10th National Delegates Congress.

Mr. Mahama has noted the attempt by some candidates to push a narrative, despite his previous cautions, that he supports their candidature.

Of paramount interest to President Mahama is Victory for the NDC in 2024 to work with expectant and suffering Ghanaians to “Build the Ghana We Want.”

He, like other supporters of the National Democratic Congress (NDC), will work with whoever the delegates choose and elect.

Meanwhile, the Office of HE John Dramani Mahama condemns a publication in a tabloid newspaper that the family of the former President is in support of one of the aspirants for National Chairman of the NDC.

The said claim and the publication are false, and the rank and file of the party are encouraged to disregard them.

Previous ‘What’s Wrong If I’m ‘Affiliated’ to Duffour when you all secretly go to him for cash?’ — Pablo to NDC Critics
Next You and Sam George are ‘Small Boys’; I was MCE when you wrote WASSCE — Pablo to Sammy Gyamfi