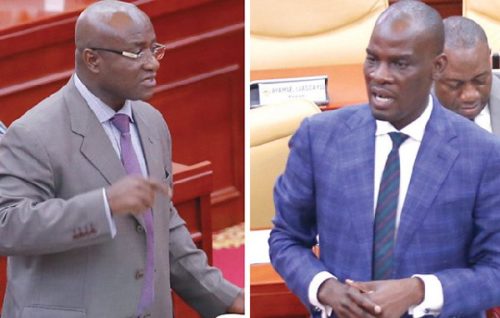 The Minority Leader Haruna Iddrisu has said that the motion of censure they filed against the Finance Minister Ken Ofori-Atta for his removal will fail if they don’t get the cooperation from the Majority side.

He said he is aware the Minority does not have the numbers to push their motion through.

Speaking on the floor of Parliament, he said after calling for a secret ballot on the motion that “if they cooperate we will be successful, if they don’t cooperate our exercise will not succeed.”

For his part, Deputy Majority Leader Alexander Afenyo-Markin said the motion of censure was a political agenda of the NDC.

It will not be supported by the Majority, he said.

He accused the opposition lawmakers of playing “mischief” with the motion.

He said “This censure motion has already failed, who told you, you are going to get any support from [our] side? it is a political motion and we won’t support, you won’t get any support. We will prove to you that it is an agenda against the Finance Minister. It is an NDC matter.”

The report of the 8-member committee that investigated the allegations made against the Finance Minister Ken Ofori-Atta by the Minority, was laid before Parliament.

See also  If we win power, is this how decisions will be taken? – Muntaka questions NDC leadership over reshuffle

The report was laid by co-chair, K. T. Hammond on Friday November 25.

The Second Deputy Speaker Andrew Asiamah directed that copies of the report be distributed to members. Procedurally, debate on it will take place in subsequent sittings, TV3’s Evelyne Tengmaa reported on Friday November 25.

Mr Ofori-Atta told the committee hearing on Friday November 18 that the proponents’ allegations do not have “weight for censure.”

He said each of the allegations leveled against him as false and went on to debunk each of them.

On the allegation of deliberate misreporting of economic data to Parliament, he said it is completely not true.

“Since I took office in 2017, I have served the country with integrity and honesty.
“Under my leadership at the Ministry of Finance, there have been significant improvements in the accurate reporting of public finances.

“Today, under President Nana Akufo-Addo, Ghanaians are enjoying greater accountability and transparency in the management of the public purse than any other period under the Fourth Republic.”

Previous Ghanaians are being unfair to Dede Ayew – MP
Next 2022 World Cup: Popular Ghanaian photographer narrates how she was nearly raped in Qatar