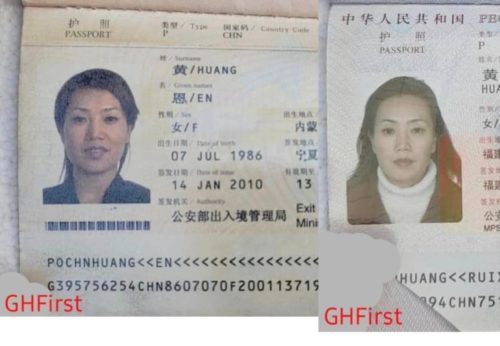 It is emerging that the infamous Galamsey Queen, Aisha Huang is in possession of multiple passports and uses different dates of birth in each of them.

Member of Parliament(MP) for North Tongue Samuel Okudzeto Ablakwa who has dropped more exposé, reveals how she has been shuttling between Ghana and Togo since 2019 after claims by the government she was repatriated,

Read the full details of his exposé below;

1. We can confirm that Aisha Huang has footprints of her physical presence in Ghana from as far back as February 27, 2019 — yes, more than 3 years ago, and much longer than originally portrayed;

2. We now know that Aisha Huang has been living in Ghana and Togo more than 3 years before obtaining her Ghana Card on February 27, 2022;

3. Our unimpeachable investigations reveal that even before Senior Minister Yaw Osafo Maafo justified Aisha Huang’s doubtful deportation in April 2019 and long before President Akufo-Addo’s statement on the dubious deportation in September 2019, Aisha Huang was in Ghana traveling on multiple occasions between Ghana and Togo;

4. We can state authoritatively that Aisha Huang uses at least 2 Chinese Passports for her travels (see evidence attached);

8. We have also secured her China Identity Card which indicates she was born on November 7, 1975;

9. Her Ghana Non Citizen Identity Card has different information from her China Identity Card – she clearly told NIA officials she was born on July 7, 1986;

11. It’s quite striking how she makes sure her Chinese passports are always issued on a January 14;

12. Even though Aisha Huang deliberately damaged the electronic component of her Ruixia Huang passport before her latest arrest (see evidence attached), the Chinese government owes Ghana some urgent clarifications on the genuineness of both passports, and if they are genuine why Aisha Huang was issued a second passport when her earlier passport hadn’t expired;

13. We now have it on authority that her multiple trips to Togo and back to Ghana since February 2019 were not on the blind side of Ghanaian authorities. In other words, she didn’t sneak in and out through unapproved routes as the Ghanaian government’s jumbled narrative suggests;

14. We come to the firm conclusion that the Akufo-Addo/Bawumia government ought to have known about her multiple travels between Ghana and Togo at a time we were told she had been deported to China because expert forensic analysis we have conducted on Ghana Immigration Embarkation and Disembarkation Stamps in her Chinese passport using the latest version of the globally acclaimed Video Spectral Comparator (VSC 8000/HS) confirms that all the Ghana Immigration Embarkation/Disembarkation Stamps in her passport are genuine;

15. Our irrefutable investigations reveal that Aisha Huang physically presented herself to Ghana Immigration officials at the Aflao border on February 27, 2019 and on April 28, 2019;

16. Despite her changing names and different dates of birth, it is most bizarre that Aisha Huang’s biometrics didn’t raise alarm at the Aflao border immigration post considering that her biometrics had previously been captured at numerous locations including at the Kotoka International Airport and the NIA;

17. Her well-stored details as contained in Ghana’s PISCES (Personal Identification Secured Certified Evaluation System) should equally have raised alarm if she didn’t have top collaborators within our security institutions;

18. It is also intriguing that the Ghanaian government didn’t appear to share intelligence on the notorious Aisha Huang with governments of neighboring countries as is standard practice, and which could have limited Aisha’s sinister movements in the sub-region;

19. From our extensive work, there is still no credible evidence that Aisha Huang was deported to China as the President and his Senior Minister originally claimed;

20. Based on what we now know, it is most inexplicable that many Ghanaian officials involved in this cruel and embarrassing conspiracy against our republic have not been fired and charged along with Aisha Huang in the current prosecution;

21. It remains a mockery of humongous proportions that all of Ghana’s security ministers are still keeping their jobs;

22. When nobody in authority is punished for this international disgrace and for this grand scheme which has left our environment and water bodies destroyed, the only logical interpretation is that national leadership, right from the Presidency is complicit;

23. It is also clear to us from concrete facts we have discovered that Aisha Huang’s charges are deliberately scanty, narrow and superficial with the obvious intention of protecting guilty accomplices in high places;

24. We believe as a responsible and patriotic opposition, we are now adequately armed to keep an eagle eye on a government that cannot be trusted on this and many matters;

25. We are stronger in our conviction that this astonishing Aisha Huang scandal requires a full independent Article 278 Commission of Enquiry which must be broadcast live to all Ghanaians.

Previous Soldier nabbed for snatching Ghc23,000 from a civilian
Next IMF Bounces Mahama