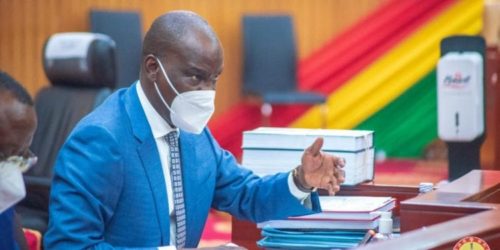 The NDC Minority Caucus in Parliament says government is likely to undertake some form of debt restructuring in the next 14-days that will possibly affect the investor community.

President Akufo-Addo has assured Ghanaians that no individual or institutional investor, including pension funds, in government treasury bills or instruments will lose their money, as a result of the ongoing IMF negotiations.

In reaction to the remarks by the President, the minority leader Haruna Iddrisu maintained that debt restructuring is inevitable considering the dire state of Ghana’s economy.

He said contrary to President Akufo-Addo’s claim that there will be ‘No haircuts’, investors in government bonds and other pension funds will be adversely affected by the move.

“President Nana Addo Dankwa in his attempt to rebut President John Dramani Mahama and our Ranking Member, the Hon. Ato Forson on debt and its management and sustainability dismissed the argument of a haircut. He was categorical that there will be no haircut.

“We are assuring the people of Ghana, we’re assuring investors, people with savings, people with investments in instruments that there will be a barber of a sort, probably that barber will be Sika mp3 dede barber. Whether it affects domestic investment or domestic instruments, we’re giving you only fourteen days from today, you’ll hear from them publicly, efforts to restructure our unsustainable debt, and those efforts will necessarily include a Sika mp3 dede barber for many persons who have investment and savings in some instrument,” he told Journalists in Parliament.

The Tamale South MP further accused the President of failing to take responsibility for the troubles the country is enduring in his address on the economy.

“The President failed to accept responsibility that he’s responsible for the sorry state of the Ghanaian economy and he’s responsible for the wrenched economy which has consequences on livelihoods, poverty has exacerbated, cost of living has gone high, cost of doing business high, many businesses are folding up, some industries are now re-routing their investments into neighbouring Ivory Coast and other countries because Ghana is no longer the investment haven as it should be.”