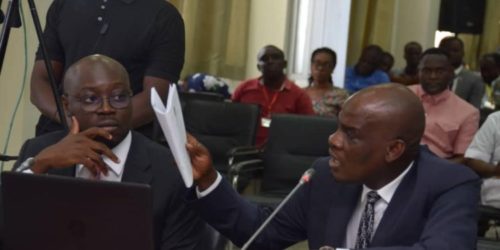 The Minority caucus in Parliament has rejected the government’s debt exchange programme intended to restructure the country’s debt into more sustainable levels.

As a critical part of the ongoing negotiations with the International Monetary Fund to secure Ghana $3 billion in support for the economy, the government is exchanging already sold bonds for new ones with a more flexible interest payment plan.

But addressing a press conference on Monday, Minority Leader, Haruna Iddrisu, said the form and structure of the programme are unacceptable.

“Let me state, without any fear of contradiction, that the form and structure of the debt restructuring plan announced by Ken Ofori-Atta are unacceptable to us, and we simply will not accept it.”

Haruna Iddrisu wondered why the contours of the debt restructuring plan were not included in the 2023 Budget Statement presented by the Finance Minister in his recent address to the House.

“How come the contours of this exchange programme were not announced in the budget statement that was presented to Parliament? Were invested consulted, were bondholders consulted, and how did he come to this conclusion?”

The Minority leader added that the Finance Minister restructuring the terms of a loan agreement without approval from parliament is contrary to the 1992 constitution and will be rejected by his caucus.

See also  The future of the French people is secure in your hands - Akufo-Addo congratulate French President.

According to the government, there will be no haircut on the principal of bonds, adding that individuals with government bonds will have their full investments upon maturity.

In a public address on Sunday, December 4, on the current economic situation, the Finance Minister, Ken Ofori-Atta said the government will ensure that people’s investments are safe.

He further announced that interest payments for domestic bondholders for 2024, will be pegged at only 5% adding that from 2025, the rate increases to 10%.

“Under the domestic bonds exchange programme, domestic bondholders will be asked to exchange their instruments for new ones. Existing domestic bonds as of 1st December 2022 will be exchanged for a set of four new bonds maturing in 2027, 2029, 2032 and 2037.

“The annual coupon on all these bonds will be set at zero percent in 2023, 5 percent in 2024 and 10 percent from 2025 until maturity… In line with this, treasury bills are completely exempted, and all holders will be paid the full value of their investments on maturity. There will be no haircuts on the principal of bonds, and individual holders of bonds will also not be affected.”

Previous Sene West: Farmers’ Day celebration called off due to alleged disagreement on whom to win ultimate award
Next Election 2024: NDC holds ‘do or die’ health walk in Pokuase