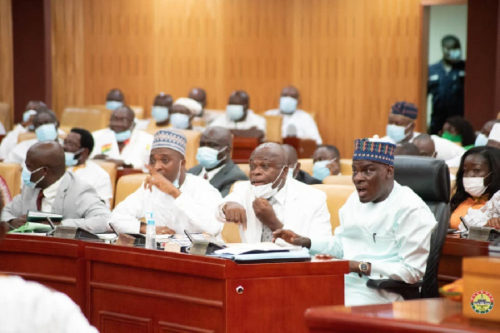 Despite stiff opposition to the 2.5 percent increment in the Value Added Tax (VAT) as contained in the 2023 budget statement, the Minority could not marshal the needed numbers to win the voting called.

After a heated debate on the floor of Parliament Thursday dawn, the matter was put to voting and the Majority won.

The Majority won with 136 votes as against the Minority’s 135.

The introduction of the 2.5 percent increment in VAT in the 2023 budget read on Thursday, November 24 came as a surprise to many, especially given the resistance by the current president, then a member of the opposition in 1995, when the tax was introduced.

See also  SIM CARD RE-REGISTATION, MP FOR AKAN SUPPORT OVER 5,000 RESIDENTS TO LINK THEIR SIMs TO THEIR GHANA CARD.

Nana Akufo-Addo was one of the leaders of the popular deadly ‘Kumi Pr3ko’ demonstration against the Rawlings-led administration.

In arguing against the policy on the floor of Parliament on Wednesday night, Ranking Member on the Finance Committee Dr Cassiel Ato Forson cautioned against the introduction of the 2.5 percent increment at this time of economic turmoil.

“I do not believe that this is the time to introduce a VAT, a tax that seems to take away additional disposable income,” he stated.

“I urge the Ministry of Finance to wait for this measure and introduce this single tax handle at the right time, during times of stability, particularly at a time when disposable income has not been eroded by 300 percent,” the Ajumako-Enyan-Essiam Member of Parliament (MP) urged.

Nhyiaeso MP Dr Stephen Amoah, however, challenged the Ranking Member and said even “giant” economies like that of the US are facing inflationary challenges and increasing taxes.

He said the National Democratic Congress (NDC) only wants to reject the VAT to “destroy the country because they want Ghanaians to vote for them”.

“I am urging my brothers [in the Minority] to bury their ego, to stop displaying their egotrips and support this good alternative and ensure that this country could rise up to continue the good works that we are doing.”

The Amendment Bill was approved.

Previous President Speak On Ahmed Suale’s killers For The First Time, Says…
Next Sekondi: Pregnant woman dies in a well