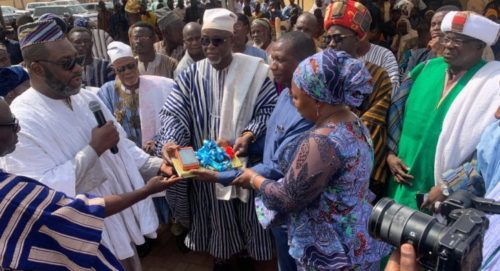 The purpose of the taskforce is to embark on a rigorous revenue mobilization drive for NEDCo for its operational areas.

Dr. Prempeh disclosed that the King of Dagbon, Ndan Ya Na Abubakari II has been appointed as a member of the Special Revenue Protection Taskforce to serve as an ambassador to ensure the effective collection of revenue for the needed development in the energy sector in the region.

The Energy Minister called for the support of the King of Dagbon to help officials of NEDCo with the installation of new pre-paid meters in Dagbon when he paid a courtesy call on him at the Gbewa Palace.

The Managing Director of the Northern Electricity Distribution Company(NEDCo), Osmani Aludiba Ayuba, revealed that the current tariff regime which sells a unit of power to them at 50.28GHp/kWh when they are supposed to sell the same unit to lifeline customers at 41.91GHp/kWh, thereby making a loss of 8.37/kWh.

He lamented about the increasing rate of power theft adding that the sustainability of NEDCo is under threat.

Mr. Ayuba stated that they have procured some smart pre-payment meters mainly to replace the other types that lend themselves more readily to manipulation and power theft.

The Managing Director of NEDCo said management under the auspices of the Ministry of Energy has constituted the Special Revenue Protection Taskforce to help collect revenue in the region.

See also  How My Brother Died Is None Of Your Biz; Late Prez Mills’ sibling tells Ghanaians

“ We have put in some pragmatic steps towards improving our overall customer-centeredness with your support and cooperation.”

The King of Dagbon, Ndan Ya Na Abubakari II, commanded the government for its continuous commitment to providing affordable electricity for Ghanaians.

According to the King of Dagbon, during the efforts of the Energy Minister, the Dagbon Kingdom has experienced for the first time the building of eight solar power plants by Ghana’s Bui Power Authority with a total capacity of 259 MWp in Yendi and other parts of the Northern regions.

“The building of the solar power plants will consolidate the development of renewable energy in Ghana. The location site of the plants in the north including Yendi, Buipe, Sawla in the Savannah region, Zebilla, and Bolgatanga in the Upper East region is a blessing for the people of Dagbon and the north as a whole.”

Ya Na noted that apart from the intended purpose of the plants of providing a reliable and affordable power supply, they will also serve as a source of employment for the people in the northern part of the country.

He, however, appealed to the government to speed up the ongoing rural electrification projects in the Kingdom and also consider the remaining communities which are yet to be awarded on contract.

“I believe that the efforts by the government in the energy sector will help address some challenges in other sectors of our economy.”