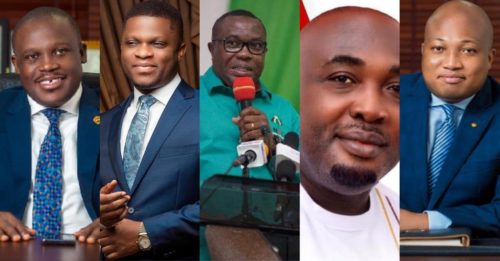 The Opposition National Democratic Congress has a number of Samuels who are set to be making huge impact for the party currently and in future.

These Samuels are made of older folks and youth two of whom have been in the news recently over the NEC Women and Youth Elections — Samuel Nartey George and Samuel Gyamfi popularly known as Sammy Gyamfi.

Another Samuel is contesting for reelection to become continue as Chairman of the NDC — Samuel Ofosu Ampofo.

Samuel Yaw Sarpong is a former Mayor of Kumasi and Ashanti Regional Minister under the Mills and Mahama administrations. He is a respected elder of the NDC and his name has come up strongly as a possible running mate if the NDC will do well in the Ashanti Region in 2020 and 2024, but Mahama swerved him for Prof Jane Naana Opoku-Agyeman who reportedly added nothing to the party’s fortune.

Samuel Okudzeto Ablakwa is the new super star of NDC politics with wide popularity on social media after a rough start in politics. His critics question his source of wealth and accuse him having never worked in his life before amassing wealth in politics. He is a 3-term MP and former Deputy Education Minister. He is ranking on the Foreign Affairs Committee in Parliament. He ambition is to serve as Vice President and rise to President if Mahama paves way for Prof Jane Naana Opoku-Agyeman.

Popularly known as Sammy Gyamfi, the National Communications Officer of the NDC has singlehandedly been a thorn in the flesh of the Akufo-Addo-led administration and Vice President Dr. Mahamudu Bawumia. Sammy Gyamfi, a lawyer, hails fron thr Bono Region and was a KNUST TEIN President and President of the Ghana Law School. Sammy Gyamfi’s Airport Hills mansion has come under scrutiny because his critics led by his party’s youth organizer say his income doesn’t match his asset. But Sammy Gyamfi is still admired widely on social media by his party members and opponents. He has razor shatp wits and tongue. He is feared by NPP Communicators on TV and Radio. Information Minister Kojo Oppong Nkrumah reportedly dodges shows if Sammy Gyamfi is billed to appear.

The Ningo Prampram MP Sam George was known but his popularity soared more after  he told then CPP flagbearer Greenstreet to “elevate” himself to see Mahama’s work. Mr. Greenstreet uses a wheel chair. Since then Sam George has become a poltical household name with mass following. He proved his power by unseating incumbent and veteran E.T. Mensah as Ningo-Prampram MP and since been reelected. He serves on the Communications Committee of Parliament and is known to champion courses for public good such as SIM registration challenges by the public. Sam George and his wife have been repeatedly cited as a model couple for thr youth with Mr. George seen as a future powerhouse at the very top of NDC and government. He is a church Elder with wide following among the youth nationwide.

Previous NDC Youth Turmoil: “I’m ready to meet you in the gutters” — Pablo to Sam George
Next IMF to inject $3bn into economy – First milestone achieved for extended credit facility