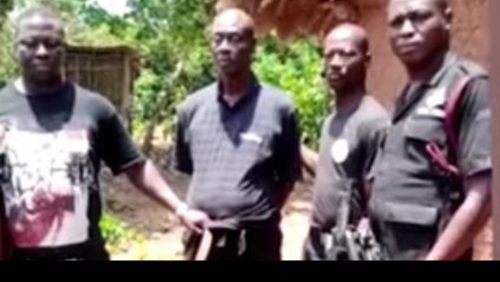 Fresh details emerging following the discovery of the decomposed body of the 25-year-old student nurse, Georgina Asor Botchwey at Mankessim in the Central Region indicates that she was sold to the chief for a possible money ritual.

The new twist suggests that Georgina left home at Yeji in the Bono East Region to attend an interview at the Ankarful Nursing Training College in Cape Coast and landed in the hands of the pastor who is believed to be her sister’s fiancé.

The family got information that the supposed pastor in the centre of the case, Michael Darko Amponsah, commonly called Osofo Kofi who was arrested by the police in connection with the murder picked her up after the interview.

Armed with this vital information, Joseph Dade, an uncle of the late Georgina narrated that quickly a soldier brother of the deceased was contacted to launch investigation into the disappearance of his sister.

According to him, the soldier followed the suspect to a village in the Central Region where he had taken refuge and was arrested for questioning.

He indicated that it was during the interrogations that the pastor confessed to the crime, revealing that Georgina had been sold to a chief in the Central Region.

“Following her disappearance, our “brother-in-law” was arrested in connection with that and he confessed that she had been sold to a chief in the Central Region, Nana Clark, but when they went there she had been killed,” according to the uncle.

Interesting how they link the mysterious missing daughter incident to the brother-in-law before confession, the mother of the deceased, Grace Andoh, disclosed that the family consulted a spiritualist, a Kumasi-based pastor who revealed that the brother-in-law who happens to have picked up the student nurse had a hand in the daughter’s disappearance but said the family was skeptical until he confessed to the crime.

“Following the disappearance of my daughter, a pastor in Kumasi disclosed to me that my elder daughter’s fiancé is the one behind her disappearance. Initially, we did not want to believe it until he was arrested and he confessed to it,” the mother further narrated, indicating that the family is surprise by the sudden turn of events considering that the suspect is a son-in-law to be.

“The family is in shock and we could hardly believe that our future son-in-law could do this to us. We least expected him to be behind this act”.

See also  I donate my sperm for ₵2,500 every week – Curtis Jackson

It was suspected that the suspects kidnapped the student nurse before she was killed following a narration by the mother that the suspect demanded for an amount of GHC15,000 from the family to perform some rituals to help find her but the family refused to pay.

Recalling some of the dubious act of the son-in-law to be, she revealed that the suspect two years ago visited the family in Yeji to perform the knocking ceremony when complained of his missing GHC30,000 from his bag in the house.

Meanwhile the two suspects have been remanded by the Cape Coast District Court II, on Thursday, September 22, 2022.

Michael Darko, alias Nana 1, a self-styled Pastor and Christopher Ekow Clarke alias Nana Crack, Tufuhene of Ekumfi Akwakrom, are to reappear on the October 4, 2022 to give prosecution ample time for further investigations.

Prosecution had charged them with two counts, namely: conspiracy to commit crime, to wit murder and murder, contrary to section 46 of the Criminal Offenses Act 1960, Act 29.

However, their pleas were not taken when they appeared before the court.

Prosecution had charged them with two counts, namely: conspiracy to commit crime, to wit murder and murder, contrary to section 46 of the Criminal Offenses Act 1960, Act 29.

However, their pleas were not taken when they appeared before the court.

Police, through a targeted special-intelligence investigation, on September 19, 2022, arrested the two suspects in connection with the murder of the 25-year-old nursing trainee at Mankessim.

The two were arrested at their various hideouts following Police investigation. The two have confessed to murdering the victim for money rituals.

Georgina Asor Botchwey, was reported missing on September 10, 2022 after she left home for a job interview and never returned, as all efforts to reach and locate her proved futile.

According to report, during Police interrogation, suspect Michael Darko, who is the alleged boyfriend of the elderly sister of the deceased and was last seen with her, led Police to the location where her remains had been buried.