Man who flogged toddler not yet arrested– Ghana Police Service 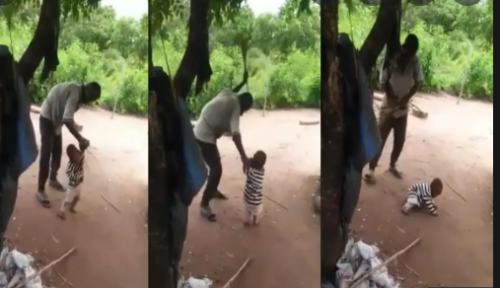 The Ghana Police Service (GPS) has debunked claims by some sections of the public that it has found and arrested the man seen in a viral video abusing a toddler.

According to a statement issued by the Police, it is following a number of leads as part of the ongoing investigation to track down the individual involved.

“The Police are following a number of leads as part of the ongoing investigation to track down the individual involved in the child abuse video which has gone viral on social media.

No confirmed arrest has yet been made in connection with the case. Our intelligence teams and experts from the Police Cyber Crime Unit are working around the clock to resolve the case.” Portions of the statement read.

It, however, assured the public that the Police Administration is counting on the public to help in the effort to rescue the child.

“We are also counting on the public for further information that could help the search and rescue of the child and arrest of the perpetrator. Therefore, we urge anyone with credible information on the development to contact the Police on 0243809991.” It said.

In the widely circulated video, a man is seen whipping the toddler in the presence of other men, while the little boy screams in pain. However, none of them made any attempt to rescue the victim.

Previous Posterity will judge you meanly if you fail the fight against galamsey – Gabby Otchere-Darko tells Akufo-Addo
Next Teaching is to demonstrate selflessness- National Best Teacher, Stella Gyimaah Larbi