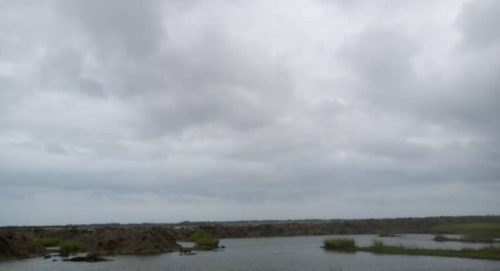 A mother and her three children are reported dead after they fell into a lagoon during a fishing expedition.

The incident happened on Saturday, September 17, 2022, at Laklevikope a community along the Lagoon lying between the Keta Municipality and the Ketu South Municipality.

Although the Lagoon forms part of the popular Keta Lagoon, it falls within the Ketu South Municipality.

The Widower, Atitso Amew, who was on the boat when the incident occurred told the media that he survived the accident by a miracle from God.

He said “the entire incident happened within seconds. I can’t believe I lost my family is such a twinkle of an eye.”

Mr. Amewu lost the wife, Yawa Apenu, aged 41. Two of their biological children aged 14 and 10 and a third child aged eight; who lived with them.

He said on the fateful day, he and the family went into the lagoon to fish as is usual with residents of the area. Since the lagoon is known to be shallow they usually walk in it as they fish. However at a spot, one of the kids slipped and fell into what appeared to be a pit.

His wife and mother of the child attempted to rescue to child, only for her to also slip into the pit. Followed by the two other kids, He then followed to rescue the entire family. However due to the slippery nature of the pit and the lagoon, his clothes unto which his family had clung, tore off. Thus separating him from his family.

A Good Samaritan managed to save him, but it was late for the wife and the three children to be rescued. Mr. Mawukor Tokor, one of the persons who helped to retrieve the bodies of the deceased confirmed that indeed the pit was deep. That but for his swimming skills from his fishing experience, he would have drowned too.

Residents have blamed the Indian Owned, Seven Seas Salt Mining Company for digging the pits to create dykes to protect their concession from flooding. However the company has denied being the cause of the unfortunate incident as the pit was outside its concession.

Meanwhile, the Ketu South Municipal Security Committee (MUSEC), has given the company 72 hours (three days) to mount warning signs along its concessions and areas that may be dangerous for fishing by the adjoining communities.

Daily Guide understands the company has complied with the directive and started mounting the sign posts. Mr. Adams Mensah, the Public Relations Officer of the Salt Mining Company had told the media that the company had already taken several safety initiatives on its concession and welcomed partnership with the MUSEC and Community leaders to strengthen sensitization and other safety campaigns in the area.

The Ketu South Municipal Chief Executive, Maxwell Koffie Lugudor assured that awareness and adequate safety measure will be put in place to protect residents who also depend on the Lagoon for their livelihood.

He visited the survivor of last Saturday’s disaster and commiserated with him. He assured him of the assembly’s support.

The Ketu Divisional Police Command has since taken over the case while the bodies of the deceased are at the Ketu South Hospital Morgue.