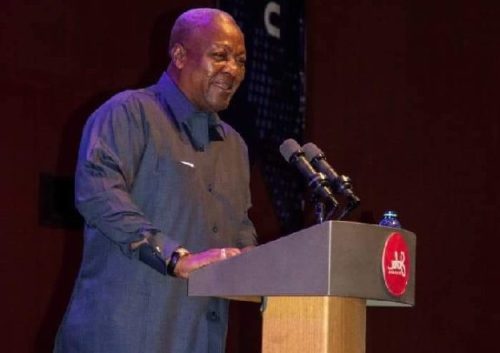 Former President John Mahama has mocked the Akufo-Addo/Bawumia-led administration by saying the governing New Patriotic Party (NPP) while in opposition thought governance was easy and that now that they are in power struggling to run the economy.

According to him, the difference between the governance of the National Democratic Congress (NDC) and that of the NPP is clear for all to see.

Speaking to a delegation of women from the Anlo Constituency of the National Democratic Congress (NDC), Mr. Mahama was full of hope that the NDC will be returned to power in 2024 given the poor performance of the NPP.

He emphatically stated that “I know that things are very hard in Ghana today. It’s not easy at all! At the time we were in power, they (NPP) thought it was an easy thing. They didn’t know what it was like to handle a country like Ghana”.

“Today, they have learned their experience. And so don’t lose hope. I am sure that the people of Ghana have seen the difference between the NDC and the current administration. In 2024, what will they do? They will return NDC to come and continue the good works [ it started],” he said to loud applause.

There is widespread discontent among many Ghanaians due to consistent price hikes in petroleum prices and general goods and transport fares, as there have been calls for the President to sack his Finance Minister.

But in an address by President Akufo-Addo on the economic crisis, he did not indicate sacking him.