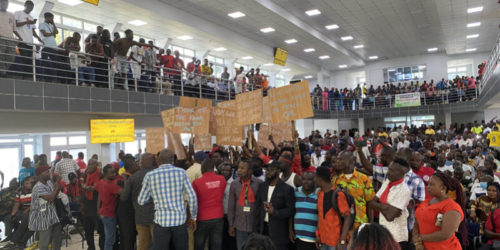 The Ghana Lotto Operators Association (GLOA) and the Lotto Agents Associations (CLAAG) yesterday threatened a nationwide demonstration over the reduction in the commission paid to lotto writers by the National Lottery Authority (NLA).

The two Associations will as well close all their offices until the government and NLA reverse the commission that had been deducted.

Addressing the media at a stakeholders’ engagement in Accra, the Executive Secretary of CLAAG, Kweku Duah-Tawia, said: “An announcement was made about a week ago that, effective 31st October 2022, commissions paid to lotto writers were reduced from 30% to 20%.”

Which means there was going to be a 10% reduction in their income levels. This announcement, he stated, followed with the implementation of the new commission of 20% given the already existing hardship in the economy.

See also  Nationwide fuel shortage as GOIL, other stations run out of fuel

According to Mr. Duah, it had resulted in several incidences of near altercations between Lotto Writers and their respective Agents. “This [is] coupled with numerous outpouring of angered writers expressing themselves through voice calls, WhatsApp and SMS messages to our offices,” he bemoaned.

He revealed that his outfit had already written to the National Lottery Authority (NLA) to register its grievance about the reduction in commissions, and hoped that there would be an amicable solution to the problem with the active participation of GLOA.

However, if the matter was not resolved by Friday, November 11, 2022, Mr. Duah noted that it would again invite its members to reconvene and decide on the next line of action.

In an interview with some of the agitated members, they emphasised that the initiative by the NLA was uncalled for, and, as such, kicked against it. They argued that the country was facing economic hardships, and this was only going to make things more difficult for them, as they were already struggling to survive.

They called for a 10% increment instead of a reduction to make things better for them. To them, if the government and the NLA did not heed their pleas, they would join other members and close their offices nationwide and embark on a sit-down strike unless the government reversed their commissions deducted.

Some also said: “There is no jobs for the youths; we feed on writing lotto numbers. The government has to think about the poor and the deprived in the society before they act.”