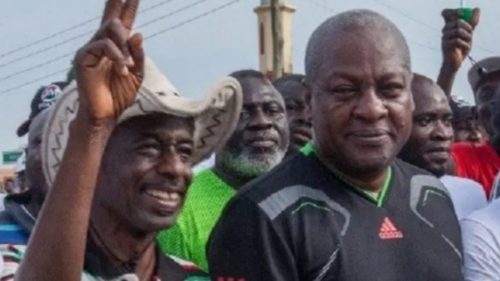 A former deputy General Secretary of the National Democratic Congress, Mr. Koku Ahyidoho, has opened up on some clandestine moves by Mr. Johnson Asiedu Nketia that led to the defeat of former President John Mahama in 2016.

Mr. Anyidoho in an interview on the Wontumi Morning Show, revealed that his former boss Mr. Johnson Asiedu Nketia alias General Mosquito, was against Lordina Mahama becoming the first lady of Ghana and described her as someone fit to sell “rice and oil” at Nima market.

The Founder and Chief Executive Officer (CEO) of the Atta Mills Institute continued that whilst eavesdropping on General Mosquito at the NDC’s party headquarters in 2016, he also heard him saying that his agenda to destroy the presidential ambition of Mr. John Mahama had come to fruition.

Mr. Anyidoho revealed that after General Mosquito had forced Mr. Mahama to concede defeat in 2016 without his knowledge, he caught him on phone saying that “he won’t let John Mahama and Lordina become president and first lady…that Lordina should go back to Nima market to sell rice and oil…Mahama, his wife and staunch supporters were like ripped pawpaw to him and he would ensure they rot and fall down. “

Mr. Anyidoho stated that he was surprised to learn that it was General Mosquito was coerced then candidate Mahama to succumb to defeat in 2016 when he hadn’t informed the leadership of the party.

“He (Asiedu Nketia) told me he was going to Sekwa to vote so I should hold the forth for him in 2016. It took me; Ofosu Ampofo and Kofi Adams to ensure that we counter what the NPP were saying that they have won the elections. To our surprise, he (Nketia) was on TV with the flagbearer conceding defeat after my infamous confortable lead press conference”, Mr. Anyidoho said.

Previous Is Ukraine’s new drone a game-changer in the war?
Next As John Mahama Appeals For Crowdfunding…Why Bypass Finance Committee To Raise Funds? Koku Anyidoho Questions