Koku Anyidoho: NDC Should Forget 2024 If They Elect Asiedu Nketia As Chairman 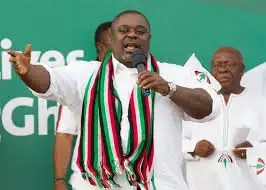 Koku Anyidoho said if the delegates elect Asiedu Nketiah as their Chairman they should forget 2024 general election.

In an interview with Oheneba Nana Asiedu on Wontumi TV Morning Show on Thursday, he fumed that the former NDC General Secretary doesn’t have the credibility to be the Chairman.

“Asiedu Nketiah will destroy the party as he did when he was the General Secretary,” he said.

Koku Anyidoho said Asiedu Nketiah has been pampered for a long time and won’t be tolerated any longer.

The founder of Atta Mills institute said if Asiedu Nketiah becomes the Chairman he will cancel the founder of the party, former President, Jerry John Rawlings’ name from NDC.

Koku Anyidoho disclosed that Asiedu Nketiah has succeeded in sacking Konadu Agyemang Rawlings from the party.

See also  ‘What’s Wrong If I’m ‘Affiliated’ to Duffour when you all secretly go to him for cash?’ — Pablo to NDC Critics

Tags Koku Anyidoho: NDC Should Forget 2024 If They Elect Asiedu Nketia As Chairman