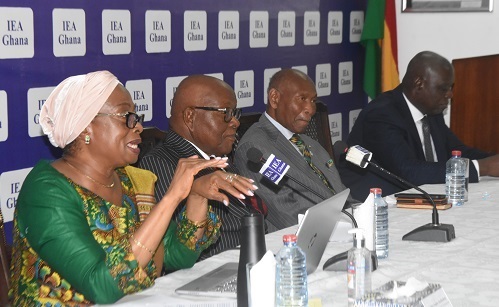 Justice Sophia Akuffo, former Chief Justice, says it has become important to limit the access to the Supreme Court under the right to appeal criminal and civil cases.

This, according to Justice Akuffo, was because the substantive issues of the cases that were brought to the Supreme Court were sometimes left at the High Court.

Such a situation, she said, led to unnecessary case load on the judges of the Supreme Court and slowed down the pace at which cases were resolved considering its scope of jurisdiction.

Justice Akuffo was speaking at a constitutional review seminar organised by the Institute of Economic Affairs (IEA) in Accra on Tuesday.

The seminar, which was one of the series of seminars organised by the Institute has former Speaker of Parliament, Professor Mike Ocquaye as the Chairman.

Themed “Judiciary and the Constitution,” the seminar was attended by the current Chief Justice, Justice KwasiAnin-Yeboah, judges from the various courts, politicians, the Chairperson of the Electoral Commission and Mrs Jean Adukwei Mensa.

Justice Akuffo noted that the reason for not capping the number of judges of the Supreme Court was due to the scope of its jurisdiction which was overbroad in many ways.

The former Chief Justice further described the right to appeal as an “open door,” saying “so long as you go through the Court of Appeal and if especially your matter originates from the High Court, you can jump into the Supreme Court.”

Justice Akuffo, also bemoaned lack of transparency in relation to the processes and modalities of the country’s judicial system such as the appointment and removal of judges, inter-mediate judicial discipline and performance standard among others.

She explained that, lack of transparency in relation to the modalities and processes which had not been clearly defined by the 1992 Constitution gave room for the citizenry to form various perceptions about the judicial arm of government.

The former Chief Justice, therefore, proposed for the establishment of an independent Judicial Commission to help address the issue of transparency and accountability.

Justice Akuffo said although, “the framers of the 1992 Constitution did a fantastic work particularly where the powers of the judiciary is concerned, a lot need to be done.”

She therefore, called for the review of the 1992 Constitution in order to cater for the irregularities and shortfalls of the judicial system in terms of the process of appointments and removal of judges among others.