Imported chicken are frozen for 3 yrs before reaching Ghanaian markets 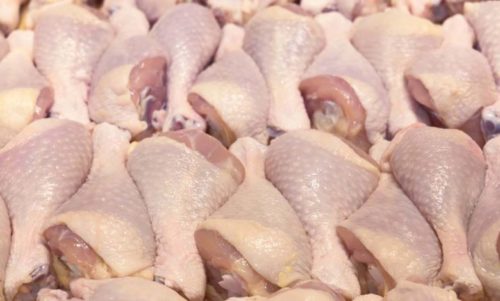 Imported frozen chicken and other meat products are preserved for, at least, three years before reaching destination markets in Africa – particularly Ghana.

This is according to the records from the Association of Ghana Industries-Agriculture Sector.

Vice Chair of the AGI-Agriculture Sector, Fatima Alimohamed, told B&FT that the situation is dire and Ghana must move quickly to curtail the growing imports of likely cancer-infested chicken and meat products onto the local market.

“This imported meat and chicken were slaughtered years back. They were not killed last month and shipped here the following month. Most have been injected for preservation purposes, and the likelihood of dire health implications are high – including cancer, which is on the rise in Ghana,” Ms. Alimohamed said.

She reiterated the need for government and private sector players to embark on localisation of food – especially in the chicken and meat subsector and other essential food items; including milk products, which have a high import bill.

Statistics from the Ghana National Association of Poultry Farmers (GNAPF) have revealed that more than 600,000 tonnes of frozen chicken were imported into the country in 2021.

The data, which is sourced from the European Union (EU), indicated that approximately US$600million worth of chicken was imported into the country last year from the EU.

This development, according to the GNAPF, has left the local poultry industry with two percent of the market share of chicken – which is controlled by imports with 98 percent.

Dumping is a problem

Speaking at a consultative meeting in August this year between the Ghana International Trade Commission (GITC) and stakeholders in the poultry value chain in Accra, president of GNAPF, Victor Oppong Adjei, said the challenge is a worrying one.

The consultative meeting was held after B&FT published a story with the headline ‘Suspected dumping hits poultry sector’, with data from the Chamber of Agribusiness Ghana.

Data from the GNAPF established that the US and Brazil are the two leading exporters of chicken to Ghana, while the EU is the third.

Last year, the EU – which is the third-highest exporter – sent over 227,000 tonnes to the country; while the US and Brazil exported figures more than double those of the EU.