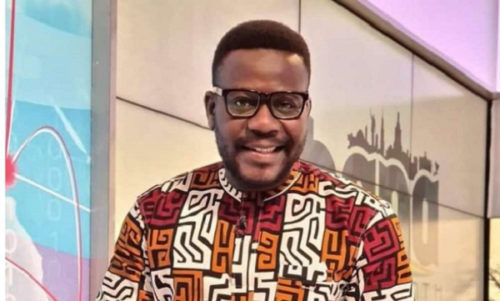 Johnnie Hughes, host of the morning show of the Accra based television station is also joined in the law suit.

The said defamatory publication per the writ of summons sighted by the DGN Online is related to a statement made on Jonnie’s Bite, a segment of the station morning programme dubbed New Day by Johnnie Hughes between August 24 and September 23, 2022, concerning the plaintiff.

Johnnie Hughes was reported to have said “Comptroller General, you were interdicted in 2013. That is what your officers are saying for the same visa fraud and permit malpractices. As of your 2019/2020 since your directive came, you are bringing all those pets to you. The people are begging to ask questions again. What are you up to? Are you doing something again?

“They say they don’t understand why you have tried to centralise everything when you have made guilty in the past and went on interdiction. Until 2017, you were interdicted five (5) years.

“The corruption must stop, Takyi must go” among other allegations.

The plaintiff averred that the statement made by the journalist was to describe him as corrupt official who is treating his officers outside unfairly and poorly as well as using his office to settle personal issues with other officers.

He also maintained that the publication is making right thinking people to believe that he has a questionable character and is unfit to fulfill his duties as Comptroller General.

That he is also using his office to enrich himself, he added.

According to him, the allegations made by the journalist are false as they calculated to tarnish his image and lower his reputation in the right thinking of members of the public.

The plaintiff further said the statement made by Johnie Hughes were defamatory of him and therefore, want an order for the media practitioner to retract and delete from it various media platforms, websites, archives or records the statement made.

He also wants the story pull down with the links deleted from all search engines the publication made by the second defendant.

Besides, he wants the defendants to render unqualified apology through the same medium the publications were made.

Finally, the plaintiff is demanding for HC20 million damages including exemplary damages and an order to restrain the defendants either by themselves or assignees from further publication or causing to be published the said words or any other words.

According to him, the statement has sore his reputation and suffered serious distress and embarrassment after he was bombarded with phone calls from friends and relatives.

Find copies of the summons below 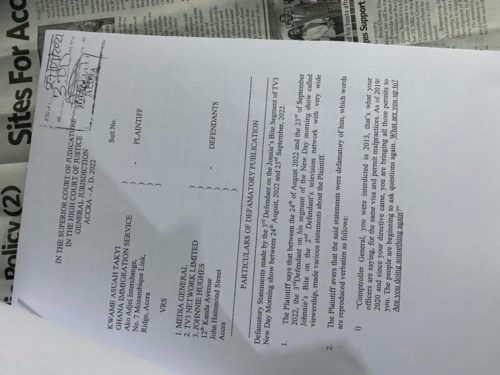 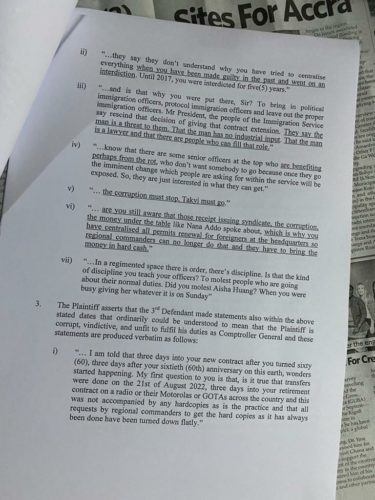 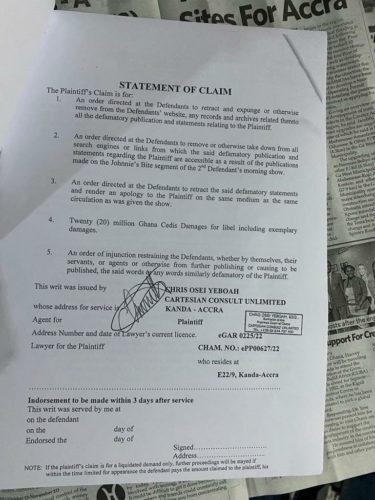 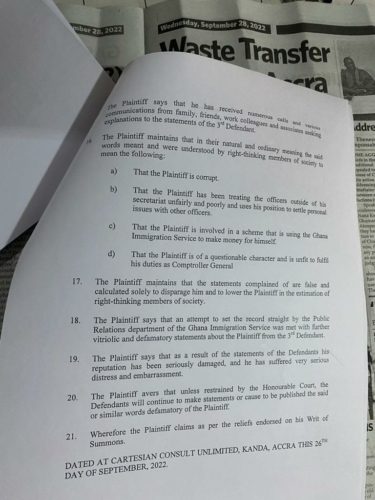 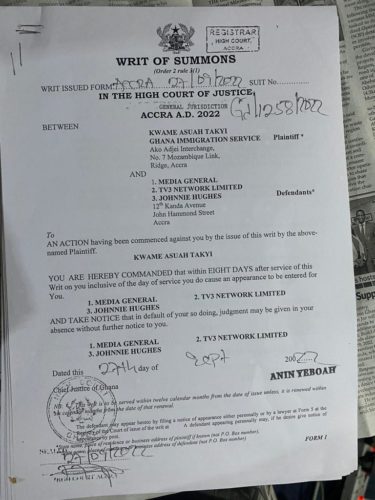