The International Monetary Fund (IMF) and Ghana are expected to announce a staff-level agreement on a loan deal today, Tuesday, December 13, after several months of talks for a $3 billion bailout.

The agreement will be made known at a joint press conference Tuesday morning by the two parties.

This will pave the way for the Board of the Fund to consider and possibly approve a programme for the country. 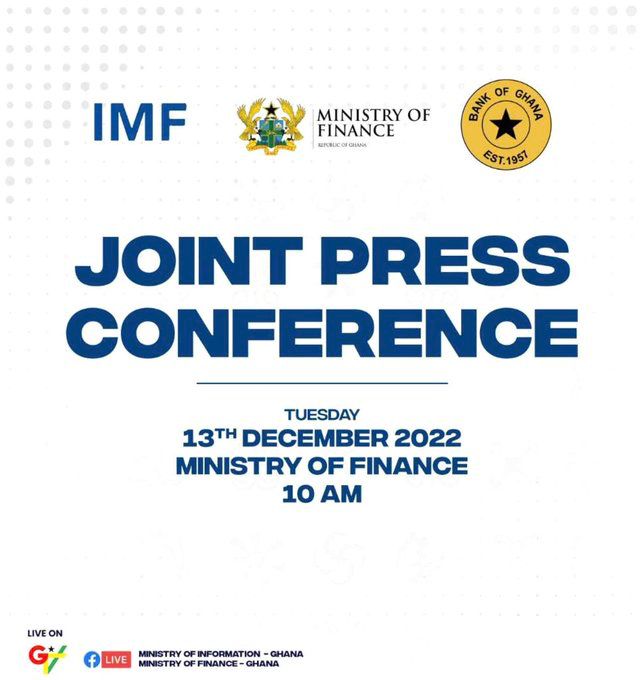 Ghana in July turned to the IMF for a $3 billion three-year period bailout as the economy faces its worst crisis in the last twenty years.

The cocoa, gold, and oil-producing West African nation has said it needs the deal by the end of the year.

The government has begun restructuring its debt by rolling out a plan to swap $10.5 billion in local bonds with new ones, a move which has been met with stiff resistance by the organised and the public.

Meanwhile, the Ghanaian Cedi was last week recorded as the best-performing currency in the world.

This short burst of positive momentum is a result of Ghana’s plan to reorganize its local debts.

This report by Bloomberg revealed that the rise in currency value is coming alongside optimism of realizing the $3 billion bailout the country has been requesting from the International Monetary Funds for months.

The report reads in part; “The cedi has rallied 10% in the past five days, the biggest advance among about 150 currencies tracked by Bloomberg. That’s a turnaround for an exchange rate that had lost half of its value this year and occupied the bottom slot in the charts.”

More extracts from the report read, “The currency was the cheapest in Africa, more than 30% undervalued versus its 25-year history last week, so some rebound after the huge fall recently isn’t that surprising,” said Charles Robertson, the global chief economist at Renaissance Capital Ltd. in London. Also we have the IMF in town, which should pave the way for dollar support.”