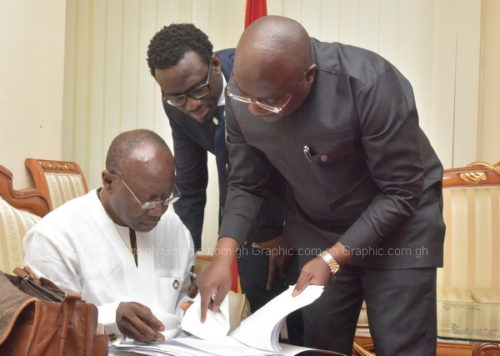 The government and the International Monetary Fund (IMF) have concluded the first round of negotiations aimed at sealing a fund-assisted programme to stabilise the economy, re-anchor growth and protect the vulnerable against the economic challenges.

The negotiations were concluded Friday after opening on September 26, 2022.

The IMF team was led by the fund’s Mission Chief to Ghana, Stéphane Roudet.

A statement issued by Mr Roudet said: “We reaffirm our commitment to support Ghana in these challenging times, consistent with the IMF’s policies.”

In the statement, the IMF described the discussions as constructive and focused on policies aimed at restoring macroeconomic stability and laying the foundation for stronger and more inclusive growth.

It said the team also explored steps to encourage private investment and growth, including by improving governance, transparency, and public sector efficiency.

Ghana requested a fund-assisted programme in July in a backtrack occasioned by heightened deterioration of macro prudential indicators, including soaring inflation, a falling cedi and growing public debt.

While inflation and the cedi depreciation ended September at 33.9 per cent and about 37 per cent, the World Bank estimates that the public debt will envelop total economic production by December 2021.

The bank said in its Africa Pulse released this week that debt to GDP will peak at 104 per cent.

In the statement issued by the IMF Mission, the fund reiterated that a debt sustainability analysis was underway.

It said the team will return to Washington, D.C. to advance its technical work.

“The discussions with the authorities will also continue in the weeks ahead, including during the upcoming Annual Meetings that will be convened at IMF headquarters,” the statement said.

The statement said the IMF staff met with President Akufo-Addo, Vice President Bawumia, the Finance Minister Ken Ofori-Atta, and the Bank of Ghana Governor, Dr Ernest Addison, and their teams.

It said the IMF team also met with the Parliament’s Finance Committee, as well as representatives from various government agencies, the Trades Union Congress, the private sector, civil society organisations, and development partners.

It also expressed the gratitude of the staff to the authorities, private sector, civil society, development partners and other stakeholders for their constructive engagement and support during this discussions.