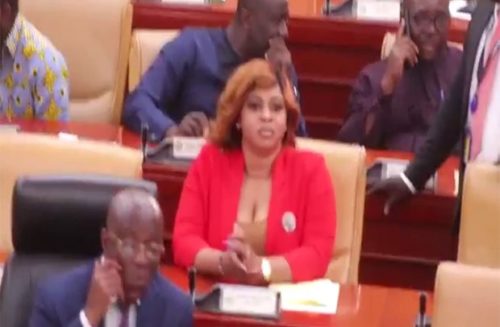 Returnee Member of Parliament for Dome-Kwabenya, Sarah Adwoa Safo has expressed her readiness to serve her constituents after several months of neglect.

“The reception has been good and it is good to be back. I am now back as MP to continue my duty,” she told a section of the media in Parliament.

Adwoa Safo returned to Parliament today Friday, November 11, 2022, after absenting herself for more than the required days the privilege accorded every legislator.

This follows the Speaker of Parliament’s ruling for the plenary to decide on the fate of the beleaguered NPP legislator.

The former Minister of Children Gender and Social Protection has come under fire for her continuous absence from the country, with the House set to debate and decide in the coming days whether her seat should be declared vacant.

Adwoa Safo requested for leave of absence in 2021 to attend to personal issues but in a statement dated Wednesday, October 6, 2021, signed and issued by the Director of Communications at the Presidency, Eugene Arhin, it was explained that Adwoa Safo’s leave was to have ended August 31, 2021, but was further extended indefinitely.

See also  Bear with us on the new transport increments - Nkwanta South GPRTU.

She was subsequently stripped of her responsibilities as Minister of Gender, Children, and Social Protection.

Efforts by Parliament’s Privileges Committee to get the legislator to give reasons for her continued absence from the House failed to yield any positive results, leading to the Committee suggesting that she should be removed from the House.

See also  The future of the French people is secure in your hands - Akufo-Addo congratulate French President.

Previous Parliament Has No Jurisdiction To Investigate Conflict of Interest- Kweku Baako
Next NPP has failed, NDC not an option; choose LPG – Akpaloo urges Ghanaians