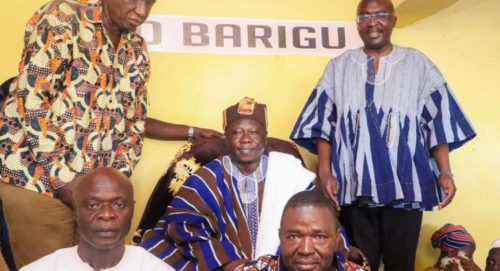 The Paramount Chief of Savelugu Traditional Area, Na Bakpeng Yoo Naa Abdulai Andani, has commended the government for the massive infrastructure projects undertaken across the country by the Akufo-Addo-led administration.

“ I want to thank President Nana Addo Dankwa Akufo-Addo and the government for the infrastructure across the country. Some of us have had the opportunity to go around the country and we are impressed with what we have seen so far.”

He urged the government to continue to deliver on its promises to the people of Ghana.

The Yoo Naa noted that the agenda 111 project is an important initiative for the people of Ghana because of the challenges Ghanaians faced during Covid-19 and appealed to the government to ensure that every district gets a health facility.

“ This is a laudable initiative and Savelugu is not left behind. We are hoping that the contractor will speed up the project so that by the close of 2024 the facility will be of good use by the people of Savelugu.”

The Paramount Chief of Savelugu Traditional Area encouraged the government to ensure that conflict-related issues in the Northern region are resolved immediately for speedy development across the affected communities.

“We need to see to it that all these conflict-related issues are resolved because they have effects on these communities and so we cannot sit down unconcerned so I called on the government to equip the security personnel with all the logistics they will need so that they will be able to work effectively.”

The Vice President Dr. Mahamudu Bawumia at the Yoo Naa’s palace at Savelugu during his two-day tour of the Northern region thanked the Paramount Chief of Savelugu for pointing out various interventions made by the government.

“ Government has established 32 Technical and Vocational Education and Training (TVET) centres, 17 centres upgraded and for the first time TVET education has been made free in Ghana.”

Vice President thanked Yoo Naa for the role he played in resolving the Dagbon Chieftaincy crisis and urged him to continue to support and advise the government for the development of Dagbon and Ghana as a whole.

He also visited the Savelugu Agenda III project under construction and met with stakeholders to see to its speedy realisation.