I will destroy NPP – Kennedy Agyapong 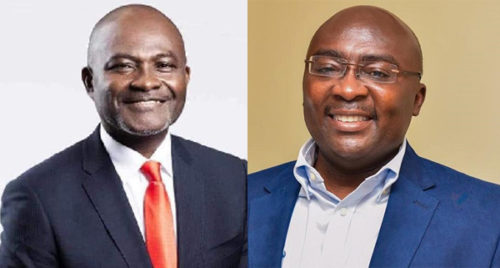 Member of Parliament (MP) for Assin Central in the Central Region of Ghana, Kennedy Ohene Agyapong, has vowed to run down the New Patriotic Party (NPP) should the party fail to elect him as the next Presidential Candidate.

The vocal lawmaker and high-ranking member of the New Patriotic Party, has already waged a scattering attack on the persona of Alhaji Dr Mahamudu Bawumia and has vowed to break the entire Party, if the leadership manipulates the Presidential Primaries in favour of the Veep.

In a series of damning revelations unleashed by Kennedy Ohene Agyapong, he has already exposed some hidden rots and corruptions within the camp of Alhaji Dr Mahamudu Bawumia led by corruption-related scandals.

Kennedy Agyapong doubted the cleanliness of his fellow patriot, HE Alhaji Dr Mahamudu Bawumia, with past speeches haunting the Veep in a crushing economy.

In one of his many revelations on the Veep, the Assin Central lawmaker, cited the managerial incompetencies of the Vice President and dared the experts to tell what is left in the Veep to earn the trust of Ghanaians.

See also  NDC Chairman vows to facilitate win for the party in 2024, seeks delegates' endorsement in the upcoming party elections

“We need to change the same face that has been lecturing you on economic theories, telling you when your fundamentals are weak, the exchange rate will expose you. When you were making that statement, the exchange rate was 4.20. Today it is 15 cedis. I have lost 12 million dollars because of his incompetence and his theory in economics.”, Kennedy Agyapong jabs Alhaji Bawumia revealed at a Programme in Upper East Region.

To compound the woes of the Veep, Kennedy Agyapong, then revealed hidden corruption scandals involving direct campaigners of the Veep.

In a war of words with a leading member of the Bawumia project, Kennedy Ohene Agyapong revealed how GHC60K was swallowed in a flash by a Member of Parliament from the Alhaji Bawumia camp.

These and many more leaked audios, have successfully dented the already bruised image of Alhaji Dr Mahamudu Bawumia ahead of the 2023 NPP Presidential Primaries.

On his part, many political pundits have already been described as anti-party members and injurious to the fortunes of the Elephant family.

From his lack of maturity to oral diarrhea, the Assin Central lawmaker, has tattered the image of his own party at the least provocations and cannot be trusted with a position as big as the Presidential Candidate.

High-ranking officials within the NPP, have already described Kennedy Ohene Agyapong, as a vindictive, temperamental and emotional character, attributes that he cannot be trusted with to lead the NPP.

In the build-up to the NPP Presidential Primaries, a visible crack has been created between the camp of Kennedy Agyapong and that of the Vice President, Dr Mahamudu Bawumia.

In the latest development, Vice President’s camp is reported to have met with Kennedy Agyapong’s camp to apologize, make peace and stem the escalation of any negatives.

They have exposed Kennedy Agyapong as a liar whose words cannot be relied on. If indeed it is true that Kennedy Agyapong just fabricated these stories then that makes him a very unreliable person.

The perceived tribal card from the Dr Bawumia’s camp and oral diarrhea from  Kennedy Agyapong, has succeeded in virtually ruling them out of the race in the Presidential Primaries.

The NPP electoral college, is watching and will be making its choice based on the political cleanliness and most competent of the candidates.