I see my election as a call to duty – Asiedu Nketiah 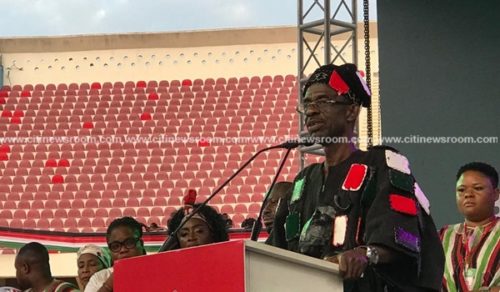 Mr Johnson Asiedu Nketiah, the new Chairman of the National Democratic Congress (NDC), has described his election as the leader of the party as “a call to duty.”

“My election indicates that the NDC is not done with me yet. I see this election as a call to duty; the duty is enormous,” he said when he delivered his victory speech on Sunday to climax the party’s National Executive Elections.

Mr Nketiah, who had served as General Secretary of the NDC for 17 years, dethroned Mr Samuel Ofosu Ampofo, who became the party’s Chairman in 2018, but lost his re-election bid.

While thanking the delegates for the confidence reposed in the new National Executive Members, Mr Nketiah said his foremost task would be to unite the rank and file of the party for victory in the 2024 parliamentary and presidential elections.

“This is a victory for the NDC and that their defeat (losing candidates) is not a defeat in the actual sense but an indication that the party needs them to serve in other positions,” he said.

He described the NDC’s National Executive Congress as an election to “regain the independence of this country,” adding that: “We are prepared to sacrifice everything, including our lives to ensure that the country is rescued.”

See also  Blame yourself if you are not seeing development in Krachi East - Prof. Mandora Writes

Former President John Dramani Mahama congratulated all the new executives and commended the party’s delegates for their sacrifices and efforts to the progress of the party.

“I believe the delegates have the best wisdom, and they have told us what they want. It is our duty to work with the blueprint,” he said.

Mr Mahama urged the new executives to “cut their celebrations short” and set to work immediately.

“(Election) 2024 has the highest stake and the executives must understand the responsibilities entrusted on their shoulders,” he said.