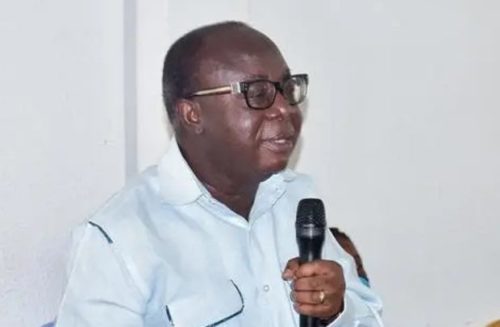 Former National Chairman of the New Patriotic Party (NPP) Freddie W. Blay has clarified that he is serving as the defense counsel for only four other accused persons standing trial in the En Huang, also known as Aisha Huang Galamsey case.

He pointed out that he is not representing Aisha Huang in court as being speculated but representing Shi Yang, Shi Meizhi, Le Wei Zuon and another.

According to him, his decision to serve as defence counsel for the four accused persons stemmed from the fact that they are not illegal miners and must be protected.

He strongly pointed out that his clients are just a collateral victims of the illegal mining case which is of the great concern to the citizenry and they are innocent of the charges preferred agaisnt them.

Giving details of the fact of the case in a statement issued by Blay and Associate on Wednesday 12, 2022, it stated that the first to third accused persons legally residents, law abiding persons in Ghana. Our clients operates supermarket business stock regular goods and some specific Chinese groceries, making them a reliable shop for Chinese and Asian patronage.

On the part of accomplice of Aisha Huang, the statement refuted such allegation, saying that “Our clients have no relationship with Aisha Huang, except the fact that purchasing the supermarket from her in 2017 when she was first repatriated to China. Aisha Huang have no business dealing with our clients upon her return to Ghana. For the avoidance of doubt, Aisha Huang was arrested at different time and place to our clients who were minding their business at home when they were picked up in the early hours on 14 September, 2022. It appears that our clients are collateral victims of the pursuit for Aisha Huang and the campaign against illegal mining.”

The statement denied media reports that his law firm represents some of the names being mentioned in the media, saying that “we have no engagement with Gao Jin Sung, Lu Qi Jun, Haibin Go, or Zhang Zhipeng who are noted to be Aisha Huang associates. We also do not have any engagement with Aisha Huang.”

Blay and Associates indicated that it is very conscious of the sensitive nature of the Aisha Huang matter and the current devastating effect of illegal mining on the environment.

Three other Chinese nationals standing trial with Aisha Huang have been remanded into the custody of the National Investigations Bureau (NIB) pending the final determination of their case.

The three are facing charges of engaging in illegal mining activities.

According to the facts of the case as read by Attorney General, Godfred Yeboah Dame, receipts of purchase of mining concessions were found in their possession at the time of their arrest and WhatsApp conversations amongst them are said to point to their involvement in illegal mining activities.

The three persons, however, pleaded not guilty to the charges.

The plea of one other accused person who is a Vietnamese national was postponed as the court had no interpreter on standby.

Meanwhile, the prosecution is expected to present eight witness statements and 18 other documents by October 24 where case management conference for the Aisha Huang case is expected to begin.

She is expected to remain in NIB custody even though her lawyers attempted applying for bail.

Mr. Blay was not in court but his daughter, Ekeleba Blay, held brief for him in court during proceedings on Tuesday, October 11, 2022.

Already, Minister of Lands and Natural Resources Samuel Abdulai Jinapor indicated that the state was unperturbed that the NPP’s former Chairman was representing the alleged illegal miners.

Find copy of the statement issued by Blay & Associates 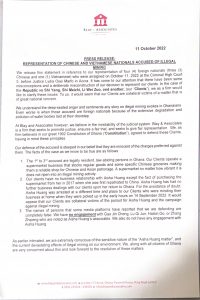 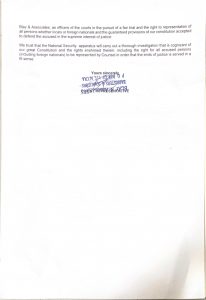