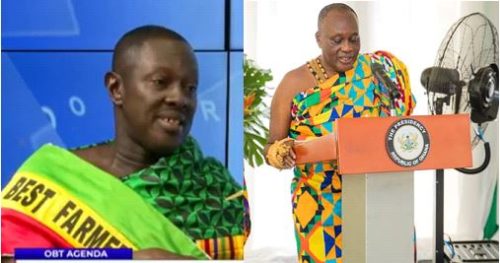 The 2022 National Best Farmer, Nana Yaw Sarpong Serebour, has refuted claims that he won the award due to the status of his father, Daasebre Nana Otu Siribuo II.

Nana Otuo Siriboe II is the Omanhene of Asante Juaben, in the Ashanti region, and doubles as Chairman of the Council of State under Akufo-Addo’s government.

Many believe that Nana Yaw Sarpong Serebour won the National Best Father Award in 2022 because his father has a hand in government.

While speaking with Akua Asieduwaa on Oyerepa Breakfast Time, Nana Yaw Siribour denied those claims, claiming that he won the award because of his hard work.

“Yes, Nana Otuo Siriboe II is my father. People are making those claims because they might not know me. I didn’t go into farming for the award; I went for the money, and the award was an added bonus that I gladly accepted.

He explained that he initiated this award process in 2014, when his father, Daasebre Nana Otuo Siriboe II, was not the chairman of the Council of State.

“I started this award in 2014. My father was not there. I became second in 2019. You will not be presented with the award on a silver platter. I won it because of my hard work.” Nana Yaw Sarpong Serebour said.