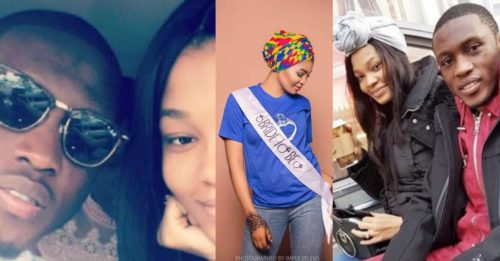 The collapsed marriage of football superstar Majid Waris and Habiba Sinare has come up again after the estranged ex-wife attacked the tribe of her ex husband and people of Northern descent.

New details are emerging about mutual alleged infidelity on the part of both husband and wife during the pendency of thr marriage that lasted a little over a year.

The former Porto, FC Nantes and Black Stars striker Majeed Waris quietly divorced Habiba Sinare but she went public with the matter and he responded.

According to sources, the Ghana striker filed for divorce because he was being denied access to his son by his wife and also about allegations that she was cheating on him when he was out of town.

Waris, who was then on a season-long loan spell at Nantes from FC Port, married Habiba in April 2017 and by late 2018. The marriage was almost over. As at then, their marriage was on the brink of collapse as the couple have been separated for about three months.

A few months later, it was rumoured that Majeed Waris accused Habiba of infidelity and was in doubt about the paternity of his firstborn on his Instagram page.

But Majeed said he was a victim of account hack. He said: “Just to confirm that I have my account back, I and my family are completely fine,”

Habiba also used her Instagram to clear the air on the matter, she posted: “Do not destroy yourself by allowing negative people to add nonsense and debris to your character, reputation and aspirations. Keep all dreams alive, but discreetly, so those with unhealthy tongues have no choice but to infest themselves with their own diseases”.

Reports also suggested the couple had irreconcilable differences after the football star blocked Habiba Sinare from pursuing her passion in acting.

This led to small family arguments which degenerated into a bigger problem with the striker opposed to his wife’s desire to seek a career in acting which he believes is contrary to Islamic principles with tricky and sexually suggestive roles for young ladies.

The movie actress packed out of their home in France without warning and left for Ghana together with their six-month-old son.

Sources close to Habiba’s family then claim that the player is unaware of the whereabouts of his wife and son which further strained the relationship.

The beautiful lady also opted not to live in the family home at Adjiriganor in the suburb of Accra and ditched the Islamic hijab, making her available to potential suitors which made matters worse and difficult to resolve after she took shots at him on Instagram

A delegation from Waris’ family to meet lady’s family to help iron out the differences degenerated into a bigger fightwith both parties trading insults.

Habiba has deleted all her pictures of Waris from her social media pages with the Black Stars forward responding in kind.