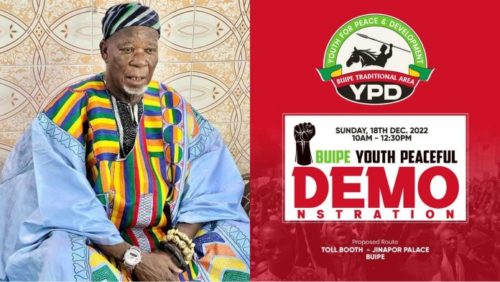 A joint Military-Police personnel numbering over 200 have been deployed to the Buipe community ahead of a demonstration by the youth of the town on Sunday, December 18, 2022.

The demonstration by the youth is against the decision by the paramount chief of Buipe traditional area, Buipewura Abdulai Jinapor II to allocate several hectors of land permanently to Fulanis in the area and as well enskin one of them with the tittle ‘Mande’ chief.

According to the youth, the unilateral decision taken by the Buipewura is in breach of the customs of Gonja and must be reversed.

“We are the future leaders and needed to be consulted as stakeholders before taking that dangerous and treacherous decision which has the tendency of making us loose our lands to the Fulanis in the future and that’s why we are concerned.

“A lot has happened in the past which we decided to remain mute but this time he has crossed his boundaries and we need to let him understand we are not happy,” the aggrieved youth have said.

The Savannah Regional Security Council led by the regional Minister Saeed Muazu Jibril have since Thursday been engaging the youth to rescind their decision to demonstrate.

The minister among other things raised concerns about the peace and security in the infant region.

“I beg you to leave the demonstration so we can deal with the issue,” he said when he met the youth.

However, the youth insist they will go ahead with the demonstration on Sunday, December 18.

The Regional Security Council after after failing to calm the youth down deployed about 200 military-police personnel to Buipe township ahead of the demonstration.

In a two-minute audio in Gonja intercepted by OnuaOnline, the Savannah regional minister Saeed Muazu Jibril told the youth the Buipewura has vowed to shoot at anyone or group who try to enter his palace with a procession in the form of demonstration.

However, the youth have called the bluff of the threats of the Buipewura and ready to go ahead with the demonstration.

Leadership of the Fulani group have since disclaimed the assertion of the youth that they have plans of appropriating some lands in Buipe.

In a statement signed by the General Secretary of the Tabital Pulaaku International Ghana chapter, Yakubu Musah Barry, people of Fulani extraction have coexisted peacefully and harmoniously with Gonjas across Gonjaland without any conflict or infractions.

“We also wish to assure that it is never the intention of the Fulani community in Buipe to appropriate any land or usurp the well tested traditional structures of the good people of Gonjaland.

“To the best of our knowledge, we only have a Fulani chief in Buipe to coordinate activities of the Fulanis just as other tribes have chiefs in Accra, Kumasi, Techiman etc,” he clarified.