Breaking News
Home / News / Headmaster who earned ¢500 monthly; his teacher who was paid ¢200 quit for galamsey

Headmaster who earned ¢500 monthly; his teacher who was paid ¢200 quit for galamsey 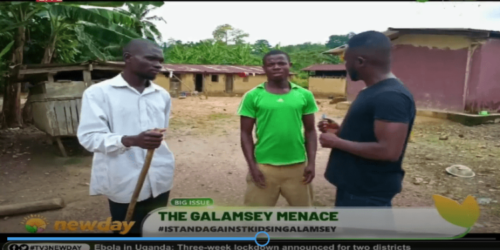 The Headmaster of the Christ the King School in Donkorkrom in the Prestea-Huni Valley District of the Western Region, Samuel Nartey, has resigned to fully engage in illegal small scale business (Galamsey).

He said he chose to go into galamsey because he could not raise the needed money as headmaster for the upkeep of his wife and children.

“I stopped teaching because of financial difficulties. I could get money to cater for my wife and children because I was being paid ¢500 and so, I decided to quit to go into galamsey,” he told TV3’s Eric Yaw Adjei in an interview.

One of his teachers Noah Fiakodzie who taught in the school for a year also quit because of poor salary.

Mr Fiakedzie intimated that he earned ¢200 monthly when he was working as a teacher but now, he earns ¢300 daily from galamsey.

Though he loves to teach he believes galamsey offers him the best opportunity to make ends meet.

He said “I stopped teaching just a year ago. I earned ¢200 when I was teaching but I stopped to do galamsey and by the Grace of God, I make ¢300 a day from the galamsey.”

This comes at a time the government is trying to fight the galamsey menace due to its impacts on water bodies and the environment in general.

President Nana Addo Dankwa Akufo-Addo indicated that the cost of treating water by the Ghana Water Company Limited (GWCL) has gone up from ¢7000 per day to ¢80,000 per day due to the impact of illegal small scale mining.

This makes a strong aces for the efforts to fight against galamsey to be increased through cooperation, he said.

Speaking in Konongo in the Ashanti Region as part of his tour of the region on Monday October 17, Mr Akufo-Addo said “I am particularly concerned about the danger to the water source, because for instance [in Konongo], because of the galamsey phenomenon the cost of production of water by the GWCL has gone up from 7000 Cedis per day to now, 80,000 Cedis per day. It is clear that we all have to cooperate to put a stop to this galamsey menace.”

The President earlier said his administration’s fight against galamsey, is unprecedented.

He told Asantehene Otumfuo Osei Tutu II on Sunday at the Manhyia Palace.

“No government has shown commitment to the fight against galamsey than my government,” he stressed.

President Akufo-Addo said this on Day 1 of his a four-day tour of the Ashanti Region.

He is expected to visit the Boankra integrated logistics terminal, also known as the Boankra inland port, and inspect progress of work.

He will also inspect the Agenda 111 project at Kokoben.

Tags Headmaster who earned ¢500 monthly; his teacher who was paid ¢200 quit for galamsey