Breaking News
Home / News / Hanke fails to touch on Cedi gain; revises his calculation of Ghana’s inflation to 56.04%, down from his earlier rate of 81%

Hanke fails to touch on Cedi gain; revises his calculation of Ghana’s inflation to 56.04%, down from his earlier rate of 81% 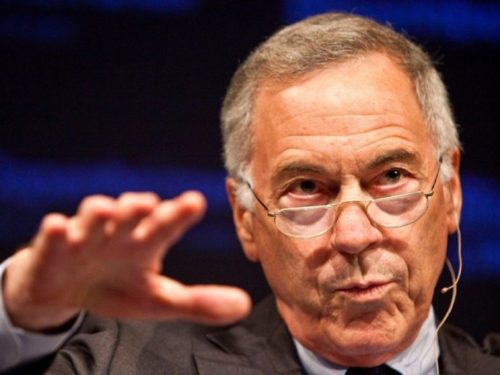 Despite the official inflation of rate of 50.3 per cent as announced by the Ghana Statistical Service (GSS), a Johns Hopkins Professor Steve Hanke says per his calculation the rate is at 56.04.

His new rate is down from the earlier rate he measured, 81 per cent.

In one of his previous tweets, he said “Leading member of the New Patriotic Party (NPP) Gabby Otchere-Darko says Pres. Akufo-Addo deserves ‘praise’ for his handling of the economy.

“SPOILER ALERT: Otchere-Darko must be on another planet. Today, I measure #Ghana‘s inflation at a stunning 81%/yr. [For August]”

Following the GSS’s announcement on December 14, that the official inflation rate has gone up to 50.3 per cent in the month of November 2022 from the previous official rate of 40.4 %, Prof Hanke in his usual analyses of Ghana’s economy tweeted on Monday December 19 that “Ghana is in 15th place in this week’s inflation table. On Dec 15, I measured Ghana’s #inflation at a stunning 56.04%/yr. That’s 1.1x Ghana Statistical Services’s reported official rate of 50.3 %/yr.”

Professor Hanke who constantly criticized the government especially the head of the economic management team, Vice President Dr Mahamudu Bawumia over the performance of the Cedi did not touch on the resurgence of the local currency.

Earlier, he suggested to the Government of Ghana to create a currency board as part of moves to stabilize the Cedi against the dollar.

READ ALSO:  Ministry of Communications meets stakeholders on DTT and digital switch over

He previously placed Ghana’s currency 15th among a list of nineteen performing currencies.

“By my calculations, the Ghanaian Cedi has depreciated 34.17% against the USD since Jan. 2020, which is why Ghana is in 15th place in this week’s Hanke’s #Currency Watchlist,” one of his earlier tweets said.

“To save the cedi,” he said, “Ghana must mothball its central bank and install a #CurrencyBoard.”

The Cedi has over the past few days, especially since the start of December 2022, been gaining strength against the major trading currencies particularly, the Dollar.

President Nana Addo Dankwa Akufo-Addo indicated that the Cedi’s appreciation against the US Dollar is as a result of the measures taken by his government in partnership with the central bank, the Bank of Ghana (BoG).

Mr Akufo-Addo said the appreciation did not happen by chance.

Speaking at the centenary celebration of the Ga presbytery of the Presbyterian Church of Ghana in Accra on Sunday December 18, he said “At the height of our challenges there were some who doubted the capabilities of my government and I to return our nation back onto the path of progress and and prosperity and lift us out of our current problems. In those dark moments, my fellow Ghanaians and and congregation, I could only recount the words of the St Matthew chapter 19 vrs 26 which states ‘But Jesus looked at them and said to them, with men this is impossible but with God all things are possible.”

He added “With the appropriate policy, determination and hard work on our part things are beginning to turn around. What seemed impossible yesterday is now becoming possible. We are definitely not yet out of the woods. However, today, the Cedi is rapidly appreciating against the US Dollar and all major currencies, making up for its losses and the prices of petroleum products are reducing at the pump.

“The strengthening of the Cedi has not happened by chance but through the implementation of deliberate policies by government in collaboration with the Bank of Ghana. These include Cedi liquidity tightening measures resulting in the offloading of forex as stalled value by speculators, the improvement of forex inflows from remittances and the mining sector and the reaching of the staff level agreement with the IMF for a 3 billion US Dollar package. All these have combined to bring the Cedi to this position and I can assure you that government will continue to work hard to maintain and sustain the gains made.

“Indeed, in the weeks ahead, the BoG will continue with the purchases of forex from the mining and oil sectors to enhance liquidity supply to the markets, continue with single unified forex forward auction and some modest targeted bilateral support  to critical import.”

Tags down from his earlier rate of 81% Hanke fails to touch on Cedi gain; revises his calculation of Ghana’s inflation to 56.04%

Previous Christmas: See Something, Say Something should be our mantra – Bawumia
Next Don’t do things to favour only one candidate in flagbearer race – Kojo Bonsu warns NDC executives