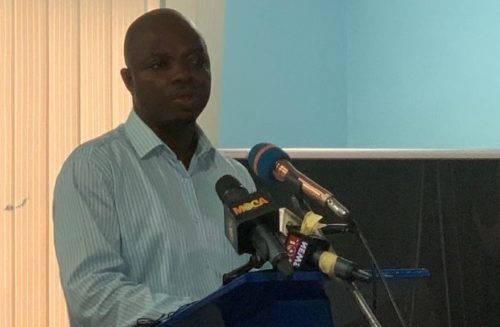 THE PATRIOTIC Forum For Accountable Governance (PaFFAG), a socio-political activist group, has watered down claims by former president John Dramani Mahama to review the law on end of services benefits for political office holders in the country.

The former president had in a recent interview said he would review Article 71 of the 1992 constitution specifically on the issues relating to the payment of end-of-service benefits to former political appointees popularly known as ‘ex gratia’ should he return to political power.

However, the group, at a press conference in Accra discounted the former president’s remarks and beckoned the public to “take any statement by former president John Mahama and his NDC on reviewing article 71 with a pinch of salt because John Mahama has developed the knack and penchant of peddling falsehood.”

Addressing the presser at the Ghana International Press Center (GIPC) in Accra, the Executive Director for PaFFAG, Kwame Baffoe Abronye stated that “the white paper on the constitutional review committee report issued by the Mills/Mahama administration accepted that, Ex-Presidents and persons who fall within article 71 of the 1992 constitution be paid ex-gratia”.

He argued therefore that “for John Mahama to make a U-turn to say he will review something he gave his blessings to and has benefited from, is a political gimmick and a lie.”

According to him, former president John Mahama cannot be trusted to review ex-gratia because “he and his government (from 2012- 2016) as well as family, appointees, and cronies” are the ones to have benefited most from the end of service benefits in the country’s 4th Republic.

Continuing, Mr. Abronye also claimed that on page 56 of the 2014 State of the Nations address delivered by former president John Mahama in Parliament, he noted that no government appointee would be allowed to purchase his or her official car or residence at the end of one’s public service.

However, he, the former president himself, “was the first person to breach the measures mentioned in parliament.”

“On 19th December 2016 in a letter signed by Chief of Staff, Julius Debrah, he indicated that H.E President John Mahama would like to have Bungalow No: 3, Prestige Link, Cantonments, and its adjoining facilities as his official retirement home and Bungalow No:6, 3rd Avenue, Ridge as his Office.

“It must however be appreciated that as at the time of this request, John Mahama was still President and that unimaginably contradicting his State of the Nation’s Address in 2014.”

More so, “John Mahama received Gh¢14M in 2013 as ex gratia and still enjoyed a whooping GH¢ 15M by way of benefits and other privileges as a former President.”

Mr. Abronye went on further to suggest that “Mahama’s claim to amend the constitution will only focus on changing the tenure of office of the president to five years” and challenged him to “do the needful” by publishing his ADB bank account statement for all Ghanaians to know whether or not he receives any monies from the state.