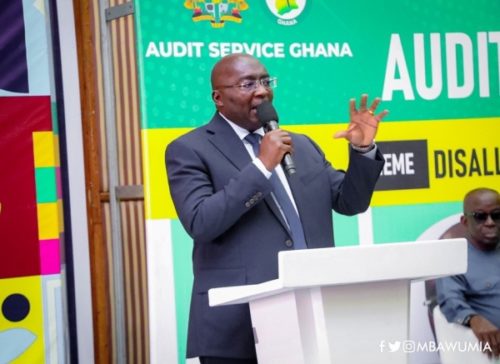 Government remains very committed to the fight against corruption, and will continue to provide the necessary support and logistics to the crime prevention, detection and prosecution agencies, Vice President Bawumia has assured.

Speaking at the 2nd Annual District Auditors’ Conference on Monday, December 12, 2022, the Vice President since assuming office in 2017, the Akufo-Addo government has made a sustained, aggressive push in the fight against corruption by enacting laws, tightening existing ones, and introducing greater digitalization in governance and the use of public funds while increasing resources allocated to the fight.

“On assuming office, corruption was prevalent in many areas such as the DVLA, where one had to pay a bribe to ‘goro boys’ in order to get a drivers licence; same thing at the Passport Office; Customs and other officers were having a field day at the ports; it was difficult renewing ones NHIS, and for some reason, dockets kept getting ‘missing’ at the courts.

“There was inadequate funding for anti-corruption agencies; the Right to Information Law had not been passed; there was no legal backing for a beneficial assets register; and no law on Witness Protection.

“But since 2017, we have taken a number of far-reaching steps in the fight against corruption, including the implementation of a digitization agenda to disrupt corruption in the public sector.

“To further boost the fight against corruption, deficits in logistics and personnel of law enforcement agencies, especially the Ghana Police Service, and other accountability institutions, are being addressed,” he emphasized.

“For instance, since 2017, Government has increased budgetary allocations to all the accountability institutions of State, including Parliament of Ghana, the Judiciary, CHRAJ, EOCO, the Office of the Attorney-General and Ministry of Justice, the Auditor General, the Office of the Special Prosecutor and the Ghana Police Service,” Dr Bawumia stated in Accra.

While commending the Auditor General, Mr Johnson Akuamoah Asiedu, the Board of the Audit Service and staff of the Service for the “very good work being done”, Vice President Bawumia reminded the District Auditors and their colleagues across the country that when corrupt activities such as financial improprieties such as misappropriation of funds, payroll fraud, and contract and procurement irregularities take place, the expectation of the taxpayers is that the public officials who commit these financial crimes would be sanctioned according to law.

“One of the functions of the Auditor-General which can combat these financial malpractices is disallowance of any item of expenditure which is contrary to law and surcharge the amount of any expenditure disallowed.

“The public, and, in particular the Civil Society Organisations have expressed dissatisfaction that the Auditor-General has not performed this critical function effectively. I am informed that the District Auditors will use greater part of this conference to discuss this very important topical issue of disallowance and surcharge. I expect these discussions to produce outcomes to inform the processes for disallowances and surcharges.

“Nevertheless, let me assure the Auditor-General and Members of the Audit Service Board that in the same spirit of cooperation, The Government of Nana Addo Dankwa Akufo-Addo will continue to provide the necessary support to the Audit Service to ensure that it operates independently as the Constitution of the Republic of Ghana mandates.”