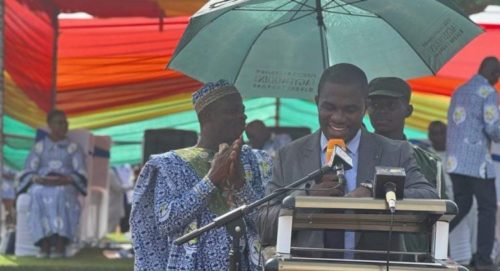 The acting Director- General of the Ghana Education Service (GES), Dr. Nkansah has said the government is investing in school infrastructure to improve education standards and equip learners with the requisite skills.

Speaking at the 60th-anniversary celebration of the Acherensua Senior High School, Dr. Nkansah hinted that government will soon begin the construction of three (3) science laboratories in the school. “I am happy to announce to you that government will soon begin work to construct three (3) science laboratories including a chemistry, biology, and physics lab and I am confident this will go a long way to strengthen teaching and learning in the school”, he said.

The acting DG who was representing Vice President Mahamudu Bawumia praised the leadership of the school and past students for the good work they were doing to augment the government’s efforts in the school.

Among others, the National Security Minister, Hon. Dr. Albert Kan Dapaah, who is a past student of ACHISCO, was eulogized and honored by the school leadership, who named a newly built dormitory block after him; the Kan-Dapaah House.

The anniversary which was chaired by the Omanhene of the Hwidiem traditional area, Nana Osuodumgya Barima Appiah Boafo was celebrated under the theme, “Provision of Quality Education through discipline and hard work amid Covid-19”.

On his part, the headteacher of the school, Mr. John Yeboah said the Free Senior High School policy had increased student enrollment and commended Government for the massive infrastructure support it continues to provide Acherensua SHS, including the resourcing the school with a 300-bed capacity boys dormitory, a 300-bed capacity girls dormitory, 3-unit classroom block, a 4-unit Home economics department with an office for the HOD, 1000 students mattresses, 500 bunk beds, 12-seater ultra-modern toilets facility for Sawyer House, another 12-seater ultra-modern toilet facility for Fordjour House and 1,000 metallic classroom mono desks for students, and a fully furnished 6 flat story-building for teachers.

Established in 1961, Acherensua Senior High School was founded by Dr. Kwame Nkrumah with support from a chief called Nana Kwadwo Fordjour, who gave his farm to Dr. Nkrumah to build the secondary school.