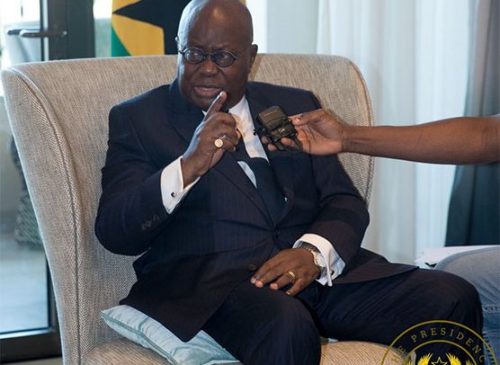 President Akufo-Addo has given a hint that very soon his government may consider a ban on small-scale mining in the country as part of the fight against illegal mining (galamsey).

According to him, the fight against galamsey should not be a fight for only the New Patriotic Party but a national one.

The President who made this known when speaking on Nkawkaw based Republic Fm, during a three day tour of the Eastern Region noted that “if there is a need to ban small-scale mining to put a stop to galamsey, then it will be considered”

The President expressed worry that Galamsey has been a menace in the country for several years and the fight against it seems to be failing since those involved do not see the harm it has on society.

In the course to fight galamsey, the president put his presidency on the line and according to him, his seats have suffered as a result.

The president emphasised that there has been a ban on the importation of changfang machines and he is determined to make galamsey cases a treason felony.

President Akufo-Addo further noted that the government’s effort to fight the galamsey canker requires working hand-in-hand with all stakeholders.

He said the government will target the main businessmen and women behind illegal mining activities.

“Galamsey is a national issue and we’re targeting financiers of these illegal activities. We won’t shield anyone irrespective of your party colour.” President Akufo-Addo stated

He said its imperative government shows determination in the fight by exposing and prosecuting any individual or group that is a financier of illegal mining activities.

“It’s important Central government shows determination in the fight against Galamsey”, adding that he is determined to make Galamsey cases a treason felony.

President Akufo-Addo indicated that, since he took office, on 7th January 2017, he has made it a central feature of his presidency to lead in the efforts to rid the country of the menace of Galamsey, with a firm commitment made in his inaugural speech on the matter.

Meanwhile, The Ghana National Association of Small-Scale Miners (GNASSM) has described recent calls by sections of the public for a ban on the small-scale mining as preposterous, insensitive and a lazy man’s approach to addressing the pollution of rivers and water bodies and the destruction of the environment as a result of illegal mining activities in the country.

The General Secretary of GNASSM, Godwin Armah said even though the Association does not agree to calls for a total ban on all forms of small-scale mining, it is prepared to collaborate with stakeholders to minimize illegal mining in the country.

Nana Akufo-Addo began his three-day working visit to the Eastern Region of the country to inspect ongoing projects and commission completed projects after hhe toured the Ashanti Region.

The Eastern Region is the 9th region the president has visited so far.