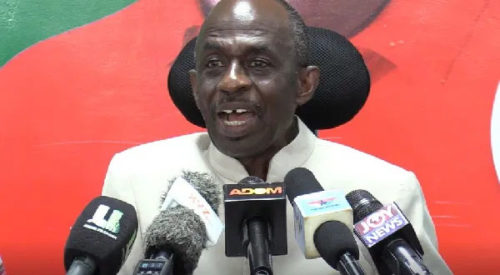 Incumbent General Secretary of the opposition National Democratic Congress (NDC), Johnson Asiedu Nketiah, barely 5-days to the national delegates congress of the party, has revealed that the NDC filed the 2020 election petition at the Supreme Court knowing very well they had no evidence that could invalidate the election results.

According to him, the party flagbearer, John Mahama could not collate results because the party’s Information Technology system crashed.

In a leaked audio trending on social media purported to be recorded during his encounter with the NDC members at a campaign meeting, Aseidu Nketiah emphatically stated that when he was first shown the pieces of evidence that he was to rely upon in his testimony in the Supreme Court and declined to be a witness to avoid potential embarrassment.

He said the same evidence was then shown to lawyer Tsatsu Tsikata for advice, adding that a day after, Tsikata told them that the evidence was too weak to stand any proper trial, and also advised them to look for another lawyer to represent them.

He said upon persistent pleas by some elders of the party including former President John Mahama, lawyer Tsikata decided to give it a try by resorting to taking on the EC Chairperson, Jean Mensa, and that’s how they ended up in court.

This recklessness by the NDC led to the destruction of properties and burnings of state assets.
In Tamale, for instance, the Central Mosque was targeted for destruction on the false premise that the NDC won the election.

Former President John Mahama again led the same reckless attacks on the justices of the Supreme Court for following the law.

But all along, the NDC knew that they lost the election and had no evidence of rigging.

At the Supreme Court’s hearing, Mr. Asiedu Nketiah swore the oath and his witness statement was subsequently adopted as his evidence-in-chief by the apex court, as counsel for the EC and President Akufo-Addo objected to some paragraphs, texts, and allegations in 10 paragraphs of the witness statement, because they were either not pleaded by the petitioner or unduly prejudicial and scandalous, as they constituted serious allegations without evidence.

The court, on hearing counsel’s submissions, struck out seven of the paragraphs in contention.

Counsel for the EC, Justin Amenuvor, took his turn to cross-examine Mr. Asiedu Nketiah on issues regarding Mr. Mahama’s agents at the various polling stations and the strong room at the EC Headquarters, the signing of declaration forms, the Techiman South Constituency results, among others.

In the course of cross-examining the General Secretary of the NDC, Akoto Ampaw had wanted to ask him questions based on the video on the flash drive attachment.

Thereafter, Mr. Ampaw drew the court’s attention to the flash drive which contained the video and asked for the direction of the court regarding how to play the said video since the court had not yet admitted the video into evidence.

Subsequently, he made an oral application for leave of the court to have the video played to confront Mr. Asiedu Nketiah on the content of the video.

Former President Mahama’s petition posited that no candidate won the 2020 presidential election and, therefore, the declaration of President Akufo-Addo as the winner of the election by Mrs. Jean Mensa was “null, void, unconstitutional and of no legal effect”.

He argued that as per the results announced by Mrs. Mensa on December 9, 2020, no candidate garnered more than 50 percent of the total valid votes cast, as required by Article 63(3) of the 1992 Constitution.

The petitioner asked the Supreme Court to order the EC to organize a second election (run-off) between him (Mahama) and President Akufo-Addo because, in his estimation, no candidate won the 2020 presidential election.

Interestingly, former President John Mahama in one of his public addresses said that the NDC went to court to calm its members.

He claims that tempers were high as a result of losing the election and therefore to calm the supporters and ensure that cool heads prevailed, he decided to seek legal redress, adding that after the Court hearing, the NDC was more unified and cool heads also prevailed compared to when the results were earlier announced.

“Our position was that there were some constitutional discrepancies in the declaration of the results and that was at the core of the case we took to court. But apart from that, there were widespread irregularities and our constitution states that the court is the final arbiter in determining electoral disputes and so as a party that respects the constitution, the only alternative was to settle the dispute in the Supreme Court and so we took the case to the Supreme Court.”

“Aside from that we also needed to go to the Supreme Court to provide some cooling off time for our people. I mean everybody knew that something was going on in respect of what they felt our grievances were in the elections and so by the time the judgment was given, passions had cooled and it kept Ghana peaceful and secure,” he said.

He openly stated that “We believe we won and we still believe that we won this election but by all standards, whether the outcome was determined for us or not we made a very good showing in this election. To have come from 106 seats to 137 seats was quite a phenomenal climb. In our estimation, there are other several constituencies that we won but you know what happened’’.

‘’Some interventions created an unfavorable and proper collation of results and so those seats were declared for our opponents. Otherwise, by our estimation, we should have won about 145 seats and taken the majority in Parliament. Currently, there is a hung Parliament 137, 137 and there are few cases in court yet to be determined so when they are determined we will know what the status of the various parties are in Parliament,” he said.

Former President John Dramani Mahama thereafter slammed the Supreme Court Judges for alleging that they were being manipulated by political powers with the decision to reject his challenge to the December 7 Presidential election result which said allegations of fraud lacked evidence.

The Supreme Court dismissed the application filed by Mr. Mahama’s lawyers in the 2020 election petition, which sought to ask it to grant leave for the Electoral Commission (1st respondent) to answer 12 questions regarding the declaration of the presidential election results.

But the court said the allegation of vote padding was not proved by credible evidence.

“We have therefore no reason to order for a re-run. We accordingly dismiss the petition as having no merit,” Chief Justice Kwesi Anin Yeboah said.

After the Verdict, Mr. Mahama addressing the US Chapter of the National Democratic Congress (NDC) at Bentley University, said “We do have problems with the Judiciary, I must say. I think that some internal reforms must take place there. It is necessary for the Chief Justice or whoever is responsible to make some reforms.

According to him, ‘’the Judiciary must undergo urgent reforms. Most of the governance institutions have been politicized. I give the example of the Judiciary. It is only in Ghana that a Supreme Court will decide that a birth certificate is not proof of citizenship’’.

He claimed “There are many such funny judgments that have been given. I remember at one time, our colleague Professor Raymond Atuguba said that from research he had done, judges turn to give their judgments in favor of the political party or leader that appointed them.

“He was subjected to such a whirlwind of indignation by the Judiciary, but if you bring it down to what is happening today, and you look at it and see who appointed who, you will find that there was some truth in the research.

“The thing is, our constitution gives the security of tenure to judges. Once you have been appointed, you cannot be removed. That is why we give security of tenure so that you will have the courage no matter who appointed you to give judgment according to your conscience. That is what our judges should do. They must rise to the occasion.”

He said “This is a clear stab in the heart of transparency and accountability to the sovereign people of Ghana, but also on our nation’s electoral system, which has deepened the grave doubts harboured by many Ghanaians about the true outcome of the December 2020 presidential elections’’.

“The refusal to account to Ghanaians further sets the worrying precedent, and I do really worry about this dangerous precedent that may allow other heads of state institutions to adopt an approach of opacity and non-accountability in their work, just because they know they can rely on unconvincing interpretations of our laws to shield them from scrutiny shortly when they are held to account,” he added.

In October last year, the former President said the 2020 election verdict by the Supreme Court had been determined even before the case was presented.

Mr Mahama, who disagreed with the apex court ruling, believes that the judgment was not “according to the rights and freedoms of Ghana’s constitution.”

Speaking during a ‘Thank You’ tour, in the Central Region, Mahama said the NDC was forced to accept the ruling for the sake of the peace of the country.

“Because we wanted peace in the country, we accepted the Supreme Court’s ruling. If you look at how the judgment was delivered, it was not according to the rights and freedoms of Ghana’s constitution. You could see that the Court had predetermined the decision it was going to take over the matter,” he said.