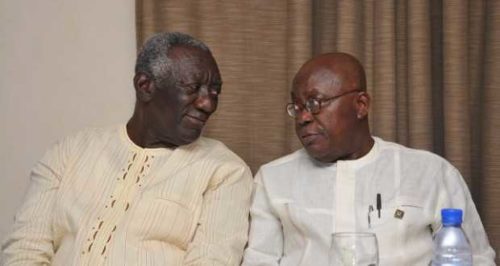 Former President John Agyekum Kufour says heads of state should not be hesitant in sacking their appointees if they are underperforming.

According to him, it is their responsibility to take such bold decisions to keep their government on track.

Already, there have been calls on the Akufo-Addo government to either reshuffle ministers or sack those who have not met expectations six years down the line.

Speaking during an interaction with the Institute of Economic Affairs at his residence, the former President said the current African presidents must take the bull by the horns.

“I didn’t reshuffle just for the frequency of it; no. The president’s role is like the coach; not just a team leader. You have to know what your ministers are doing, whether they are being positive or whether they’re just being average when you expect more from them, and you should have the courage to say you don’t belong here, go there, or perhaps sit aside and that thing should not be seasonal; it should be continuous.”

President Nana Akufo-Addo has said he has no intention to reshuffle his ministers any time soon, insisting that his appointees were meeting his expectations.

While President Akufo-Addo said he evaluates the work of his ministers consistently, he feels “many of them for me have done outstanding work. Their output has been considerable, and that is what I look at.”

“If the output measures expectations, then I don’t have any strong reasons to heed the call,” President Akufo-Addo added.

The President also believes calls for a reshuffle sometimes have ulterior motives.

“The calls come for all kinds of reasons; NDC wanting to destabilise the government is one. There are people who are also looking for jobs.”

President Akufo-Addo’s only ministerial reshuffle was during his first term, in August 2018.

Since then, he made some changes to his ministers and dropped some portfolios after criticism that his government was bloated.

President Akufo-Addo also recently revoked the appointment of Sarah Adwoa Safo, who has been absent from work for an extended period.

She was the Minister for Gender, Children and Social Protection.