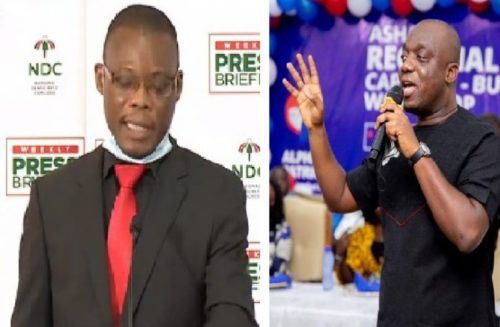 Fifi Kwetey, an outsider for many political pundits, pulled a surprise at the 10th National Delegates’ Congress of the NDC to beat Dr Peter Boamah Otokunor and Elvis Afriyie Ankrah to emerge the General Secretary.

While Dr Boamah Otokunor was the party’s Deputy General Secretary until he declared his interest to vie for the post, Mr Afriyie Ankrah was the Director of Elections.

See also  Hanke fails to touch on Cedi gain; revises his calculation of Ghana’s inflation to 56.04%, down from his earlier rate of 81%

But Mr Kwetey, a former Member of Parliament for Ketu South Constituency, over 4,000 votes to beat the two.

Earlier in the year, in July to be precise, Justin Kodua also pulled a surprise, beating incumbent John Boadu to be NPP’s General Secretary.

In an interview with Media General’s Komla Klutse, just a few moments results tilted in his favour at the Accra Sports Stadium, Mr Fifi Kwetey said there was no need to compare him with the former Youth Employment Agency (YEA) Chief Executive Officer.

“To be honest, I don’t see the need for comparison at all,” he stated.

“Two separate individuals, two separate political parties. I will say that I wish him well in his endeavour while we focus on numbers as well and let’s see which party will be able to put the best solution for the sake of our country.”