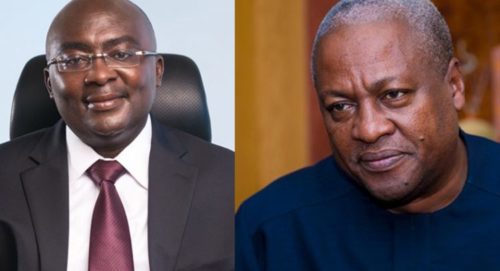 DESPITE THE current global economic challenges which is having a devastating effect on the Ghanaian economy, it appears most Ghanaians have enormous confidence in the Vice President, Dr. Mahamudu Bawumia, to provide a more reliable leadership at the next polls in 2024.

Interestingly, as many as 19% said they won’t vote for either of them because the parties they both represent, NPP and NDC, are the same.

See also  2022 WASSCE results: Free SHS is working, there can be no more any controversy about its validity – Akufo-Addo

Both Vice President Bawumia and former President Mahama are expected to win their party’s nominations for the 2024 presidential elections.

While the 2024 elections would be Mahama’s third time at the poll, and the second attempt to stage a comeback after being ousted in 2016, it will be Bawumia’s first time of seeking the mandate of Ghanaians to lead the country.

Dr. Bawumia has, however, contested four times as running mate of President Akufo-Addo, and has been supporting the President as Vice President since 2017.

On questions such as “Were you inspired by the recent speech given by Ex-President Mahama on the economy?” 35% said Yes, 37% said No, while 28% emphasised that Mahama was not fit to give such speeches on the economy because they knew his record on the economy when he was President, adding his corruption record and incompetence baggage made him a liability to Ghana.

“Who will you vote for in 2024 between Mahama and Bawumia?” 46% said Bawumia, 35% said Mahama, while 19% said they will not vote at all because both parties were the same.

Also, “Do you trust Mahama to do better as President than he did in his first time?” 36% said Yes, 47% said No, while 17% said not sure but they knew Mahama was too corrupt as President in all the infrastructural projects and procurement process, he did especially, Airbus scandal.

“Do you trust Dr. Duffuor to do a better job than Mahama as NDC candidate?” 47% said Yes,

35% said No because he had no record or experience as President. 18% said not sure but he represented a breath of fresh air better than corrupt Mahama.

“If elections are held today, what are the issues will you consider as basis to vote”. 31% said the economy, 33% said corruption, 31% said Free SHS, while 4.5% said other factors.

“Which party will you vote for in 2024 and why?” 41% said NPP because they believed they were better managers of the economy despite the recent global economy downturn in the midst of COVID-19 and the war in Ukraine. 35% said NDC but this would depend on whom they chose as presidential candidate. Also, 24% said both parties are the same and will sit at home and not vote at all.

Info and Assessment Research is an independent organisation operating in 17 African countries.