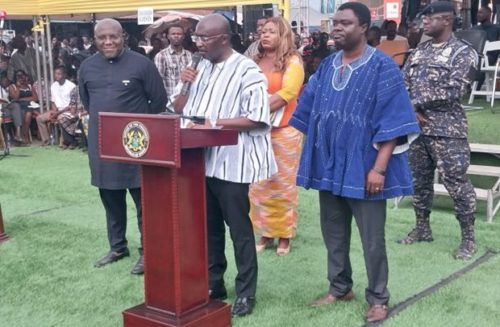 VICE PRESIDENT Dr. Mahamudu Bawumia has urged Ghanaians to be patient with the Akufo-Addo-led administration, since plans are underway to implement new economic measures to reduce the current economic hardships in the country.

According to the Vice President, the New Patriotic Party (NPP) administration was very much aware of the current economic hardships, which are a global problem.

He said government was employing all available means to change things for the better for Ghanaians.

Dr. Bawumia said this when he spoke at the Suhum Odwira Festival last Saturday on the theme: “Development in Unity.”

He said the government would soon roll out measures that would ensure that the prices of some essential commodities were reduced.

Touting the developmental projects of the ruling government, he said the Akufo-Addo-led government has constructed more road networks, railways, classroom blocks, and other infrastructure.

He also urged the residents of Suhum to ensure that they sanitised their environment to ensure healthy living.

The Chief of Suhum, Osabarima Ayeh Kofi, in his speech, noted that Suhum stood for peace.

He, therefore, tasked the government to consider Suhum as the destination for meaningful economic development as it is well-known for its hospitality.

He also pleaded with the government to secure jobs for the youth.