‘Every bullet, every bomb that hits Ukraine hits our pockets directly’ – Akufo-Addo 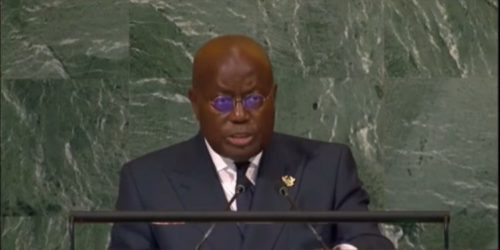 President Akufo-Addo has lamented the impact of the Russia-Ukraine war on African economies.

He said the war is having a direct impact on African lives.

According to him, just when the continent was recovering from the impact of the Covid-19 pandemic, the war struck worsening the situation.

President Akufo-Addo said this has led to public debts.

“By 2021, COVID-19 had pushed Africa into the worst recession for half a century. A slump in productivity and revenues, increased pressures on spending and spiralling public debts confronted us without relent.

“As we grappled with these economic challenges, Russia’s invasion of Ukraine burst upon us, aggravating an already difficult situation. It is not just the dismay that we feel at seeing such deliberate devastation of cities and towns in Europe in the year 2022, we are feeling this war directly in our lives in Africa.

“Every bullet, every bomb, every shell that hits a target in Ukraine, hits our pockets and our economies in Africa,” he lamented while delivering a speech at the 77th UN General Assembly on Wednesday.

He also called for immediate reform of the world’s financial market to benefit Africa.

He explained that the current system is a disadvantage to developing countries, and as such, an equitable one that would serve all countries should be considered.

“The tag of Africa as investment risk is little more than in substance. It is a self-fulfilling prophecy created by the prejudice of the international money markets which denies us access to cheaper borrowing, pushing us deeper into debt.

“The financial market has been set up and operates on rules designed for the benefit of rich and powerful nations,” he observed.