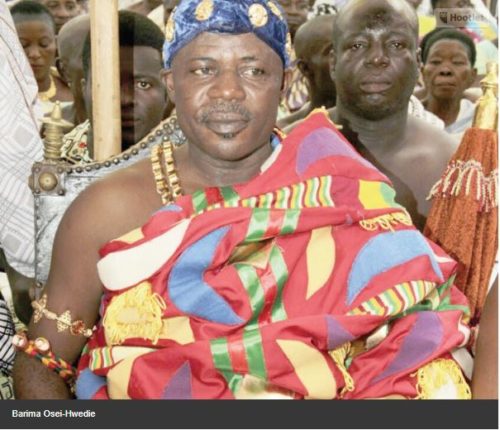 The Paramount Chief of Ejura Traditional Area in the Ashanti Region, Barima Osei Hwedie II, has destooled Nana Obiri Yeboah who’s the Chief of Miminaso Number 2 which falls under his paramountcy.

This decision comes after Nana Obiri Yeboah disobeyed the orders of Barima Osei Hwedie and also lied to the latter.

The Ejurahene about three months ago ordered the destooled Chief to ensure that all Fulani settlers who do not have residence addresses many of who are herdsmen and have secured about 40 acres of land and causing problems in Miminaso Number 2 are flushed out of the town.

However, Nana Obiri Yeboah for his own parochial interest was found to have still harbored a rich Fulani man with many workers in the town in flagrant disrespect of the Nana Ejurahene’s orders.

Anytime he was asked about the Fulanis in the town, he vehemently denied they were still in the town as he’d driven all of them out of the area.

However, it was established that the destooled Chief asked the Fulanis to vacate the town only ahead of Ejurahene’s visit to Miminaso Number 2 this past Saturday.

Ejurahene Barima Osei Hwedie, who was not happy with the conduct of Nana Obiri Yeboah destooled him.

Ejurahene Barimia Osei Hwedie, has been concerned about the living of Fulanis in Miminaso Number 2 following a series of armed robberies being perpetrated by them.

On Friday, November 25, 2022, some Fulani armed robbers attacked and killed a Police officer who was off duty between Miminaso No.2 and Nyamebekyere on the Ejura Nkoranza road in the Ashanti region.

Suspect, Salifu Adams was arrested for the crime while police pursued his other accomplices.