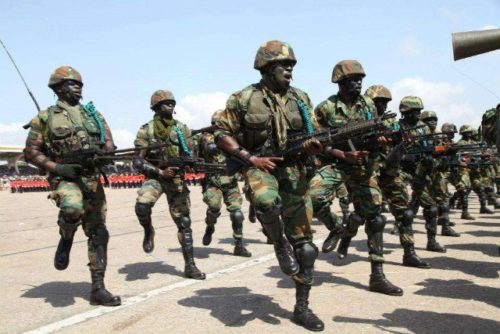 The government has formally started negotiations towards increasing the salaries, allowances and other emoluments of the military.

This was revealed by President Akufo-Addo the troops during his Kumasi Tour at Idris Barracks in the Ashanti Region, where the President exhorted the men and women in uniform to remain loyal to Ghana’s Republican Constitution in these tough time.

According to the President, the condition of service of the military who put their own lives at risk is important.

The President revealed the military have already received their Cost of Living Allowance (COLA) and negotiations are on course to review their salary upwards.

President Nana Addo Dankwa Akufo-Addo also urged the rank and file of the military to remain “Patriotic and loyal” to Ghana’s Republican Constitution in the face of the nation’s current difficulties.

Speaking about the difficulties the country is facing, President Akufo-Addo urged the military to support him steer the nation out the challenges by remaining loyal and Patriotic.

“On the economy, we are all aware of the events that have taken place in the last year which has brought a lot of things under strain. We are making every effort in negotiations that are taking place with foreign partners to put our economy back in a good space. Very soon the difficulties that confront our economy are going to be things of the past.

The President went on:

“I want to encourage you to continue the good work that you’re doing for our country. I encourage you to stand firm in your loyalty to the Republic, your loyalty to the Constitution of our nation so that the orderly, peaceful development of our country which is the only way that can guarantee the future prosperity we are all working for can come about…. So that these [present] generations of Ghanaians will leave as our legacy, that even when things were difficult in Ghana, we all held together under our Republican institutions and our constitution to find a way to a better future for our nation. I am confident that we can do it and I am counting on you to help me do it.” The President Ended.