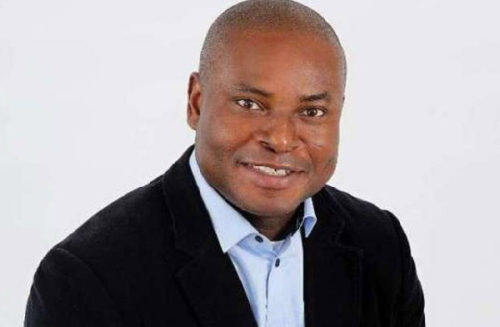 Some of the demonstrators at the “Ku me preko” protest on Saturday, chanted and called on the President, Nana Akufo-Addo, to resign over current economic woes, but the Director of Communications for the New Patriotic Party (NPP), Richard Ahiagbah downplayed the rationale behind the protest.

The protest saw a section of Ghanaians, civil society organisations and other activists join the demonstrators in the principal streets of Accra. 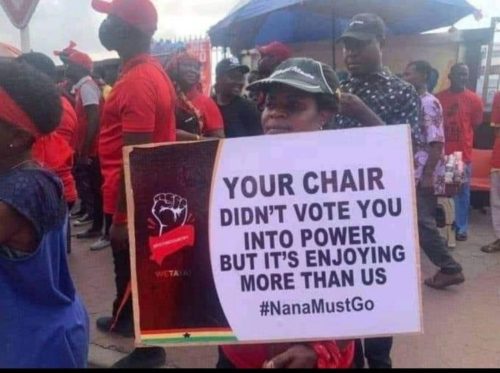 But Mr Ahiagbah, insists the action is baseless, adding the only justification he sees in the protest is the display of democracy and nothing beyond that.

The protestors who massed up at Obra Spot at the Kwame Nkrumah Circle walked through some principal streets of Accra.

They were clad in red and black attires holding placards with inscriptions such as: Adinkra Symbol of failure, Boo the President, Sika mpɛ mismanagement, Protect Journalists, impeach the President, the battle over the Lord sef, among others. 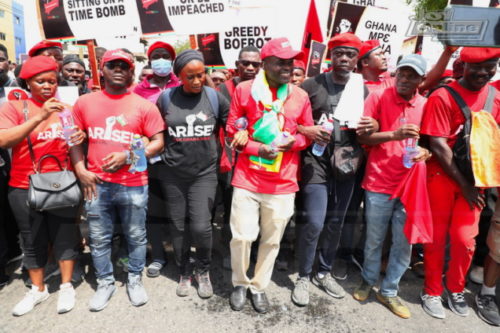 The protest was led by private legal practitioner Martin Kpebu who is pushing for the resignation of President Akufo-Addo over Ghana’s current economic woes.

Some civil society organizations, including #FixTheCountry, Arise Ghana, Economic Fighters League and other activists, have joined the demonstrators, saying the President and his government, have not done enough to alleviate the plight of citizens in the struggling economy.

One of the organisers of the demonstration and a social activist, Oliver Barker-Vormawor, explained that the protest is to kick against the Akufo-Addo government’s abysmal performance. 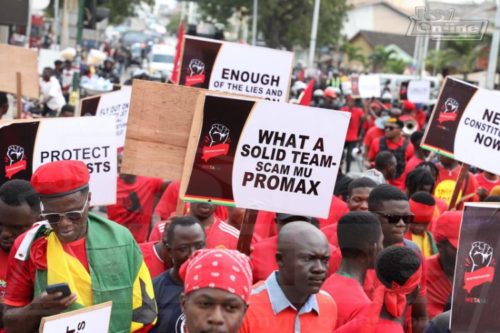 He claimed that government appointees have enriched themselves with state funds at the detriment of the ordinary Ghanaians, adding that the government has failed to deliver on its mandate hence the need for Ghanaians to sack him from office.

“Democratic culture is built on accountability, and demand of citizens for their lot. It is written into the fabric of democracy that, if the leadership, those who have sought the mandate of the people fail to deliver that mandate, people have the right to take back that mandate from them. We say sovereignty belongs to us as the people. So from time to time, we must demand it be returned to the people. This is what this demonstration is all about. The willingness to stand up against brutality, against a regime that is continuously being oppressive, this is what we are here to do, this is what the people have come here to speak against,” he fumed.

Though the turn-out was not what they expected, Mr Baker-Vormawor, said he was happy about the number of people who gathered to support the demonstration

He said the gathered protestors are witnesses to the government’s terrible ruling of the country.

“I’m not disappointed at the numbers, l thought l was coming to walk alone, but l came and met people more than l thought. People have showed up, so we are ok with it,” he said.

A number of police personnel with horses, armoured vehicles were spotted at the demonstration grounds.

Speaking to the media ahead of the protest, Martin Kpebu said the wanton corruption and mismanagement of the economy give a clear indication that Ghanaians can no longer wait until the end of Mr Akufo-Addo’s four-year term.

He said after today’s protest, the president, together with his vice, ought to leave office in order to pave the way for the constitutional provision for his replacement to be set in motion. 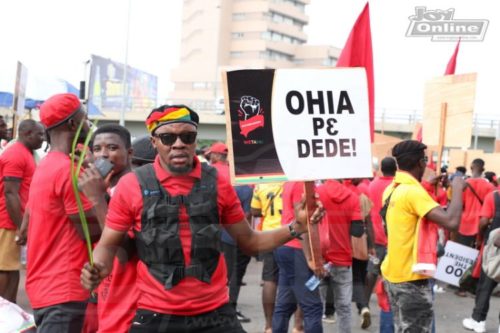 “This can’t continue. We can’t borrow all the time and have Databank becoming richer all the time. Citizens have a duty as stated in Article 41 [of the Constitution] to ask the president to resign and this is not the first time that a president of Ghana is going to resign,” Martin Kpebu said.

Mr. Ahiagbah, told Accra-based Joy FM, on its Newsfile last Saturday,“so the only basis in my view that perhaps the demonstrators have this morning to be on the street is democratic. But in terms of the substantive issue to say that the government or President has done anything incidental to cause them to be on the street, I don’t see it.”

On the angle of hardship being suffered under the NPP administration, the Communications Director insisted that the causes of these factors have nothing to do with domestic activities. 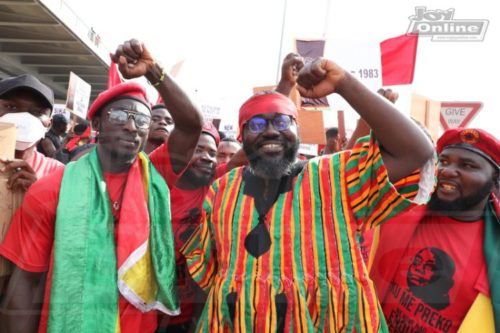 The President and government communicators have constantly pointed fingers at Covid-19 and the Russia-Ukraine war as major contributors to Ghana’s economic woes.

Mr Ahiagba explained that he has assessed the President’s journey and “you can find one single basis for the behavior suddenly, in these times.”

“Ghana is going through hardship. That hardship can be explained and can be rationalized. The President spoke about it and the data shows exactly that there are incidental issues that are beyond our control that is forcing the situation on us,” he told Samson Anyenini.

Ghana is currently at the doors of the IMF for a possible $3 billion bailout amid intensifying hardship, skyrocketing fuel prices, a rising cost of living and a depreciating cedi.