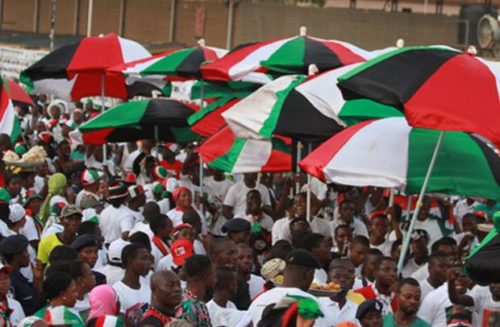 The Functional Executive Committee (FEC) of NDC has resolved to uphold the Elections Directorate’s annulment of elections in four constituencies in the Region.

This follows allegations leveled against the Election Committee members, who were fingered for the orchestration and manipulation of the elections.

Interestingly, some constituencies have been hit with court injunctions due to the delay of ballot papers and some ghost names in the party album, as the election in the Lower Manya Krobo has been put on hold until further notice.

The decision was taken by FEC after a comprehensive review of the conduct of last weekend’s constituency elections held across the country.

The elections as gathered held in these constituencies are illegal, hence null and void, as the party does not recognize same.

The Functional Executive Committee (FEC) of the NDC in a statement issued on Wednesday, October 26, 2022, said, a review of the constituency elections held last weekend across the country shows the election was largely successful however was not enthused and indeed took a serious view of the poor manner in which a few constituencies conducted their elections.

According to FEC, the Committee noted that some constituencies experienced challenges which include avoidable delays in printing and delivery of ballot papers, avoidable errors on printed ballots, and willful failure by some constituencies to adhere to directives of the National Election Directorate.

To that effect, FEC took strong exception to disregard the directive of the election directorate on elections in Mpraeso, Atiwa West, Afram Plains South and Atiwa East to be suspended pending the resolution of some issues, therefore, has annulled the illegal elections held in these constituencies.

The statement further said “FEC by unanimous resolution, dissolves the Regional Elections Committee of the Eastern Region with immediate effect. The National Elections Directorate has been directed to put together a special task force that will collaborate with the Regional Executive Committee of the Eastern Region to oversee the conduct of the elections in the remaining constituencies in the Region”.

FEC resolved to launch a full-scale inquiry into the challenges relative to the printing and delivery of ballots as well as gross indiscipline leading to the flouting of directives of the National Election Directorate for appropriate sanctions.

The decision by FEC to annul elections held in Mpraeso, Atiwa West, Atiwa East, and Afram Plains South has sparked anger in the constituencies as some delegates and executives of the party have threatened to violently resist any attempt to re-conduct any election.

They are threatening to beat up members of the national election committee with particular mention of Daniel Amartey (Deputy Director of Elections) and Alex Segbefia.

The Regional Election Committee chaired by Alhaji Sumaila Mahama reportedly conducted the election in Atiwa West after a letter from General Secretary Johnson Asiedu Nketiah resolved the issue in a letter dated October 4, 2022, which stated that “I hereby under the powers vested in me by the Functional Executives Committee through the authority of national executive committee revoke the suspension of James Okoi in Atiwa West Constituency, the net effect is that he is free to contest and can be vetted”.

In Afram Plains South, the Regional election committee went on to hold the election in the best interest of the party considering that,1,200 delegates had traveled from the island and remote communities to converge at the election venue at night, and the fact that, the said injunction was not placed on the election but individual candidates contesting the election.

DGN Online understands the procurement and award of the contract for the printing of ballot papers for the conduct of the Constituency election in the Region were done before the Regional Election committee was constituted to begin work on October 14, 2022.

The National Election Directorate failed to make an early payment to the Printing Company until almost 24 hours before the election on October 22, 2022

The company was reluctant to prefinance the printing because the NDC owes the company a huge amount for previous work done.

According to party insider who spoke to DGN Online, due to the delayed payment and errors in names and image mismatch, the printing of ballot for the constituencies in the region were not finished on time for the election to be held in many constituencies during the weekend.

No Cash for Election Committee

The Chairman of the Eastern Regional Election Committee, Alhaji Sumaila Mahama as gathered also singled handily financed the activities of the committee including the distribution of ballot papers because the national election directorate did not release funds to them for the conduct of the election.

Alhaji Sumaila Mahama was compelled to fuel his private car to distribute the ballot papers at midnight and dawn for constituencies whose ballot papers were ready.

However, by the close of Sunday, 12 Constituencies had held their elections and the Regional Election committee sent a report to the National Election Directorate to that effect.

Some bigwigs in the party in the Region believe the dissolution of the Election Committee was done in haste and unfairly considering that members of the committee were not given a fair hearing and the fact that an investigation was not conducted into what occasioned the challenges encountered in the conduct of the election.

Failed To Pick up Calls

Meanwhile, attempts to speak to the Regional Executive committee on the issue have been unsuccessful as all calls sent to Baba Jamal Konneh have not been responded to.