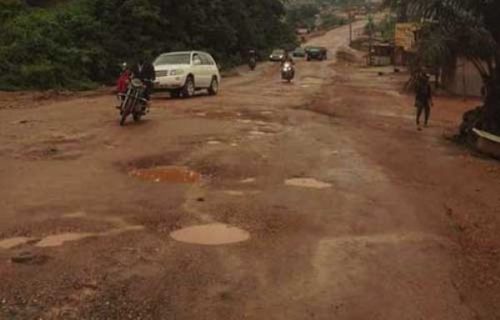 An opinion leader in the Mangoase area, Opanyin Kofi Saakwa narrated how they have been suffering as a result of the poor condition, of the roads

Residents of Mangoase in the Akwapem North Municipality, of the Eastern Region, are angry about the the bad state of their roads.

The residents, say they have not seen tarred roads, “since independence.”

According to the residents, the best they have seen is the grading of the roads by philanthropists and through communal labour when it gets bad.

An opinion leader in the Mangoase area, Opanyin Kofi Saakwa narrated how they have been suffering as a result of the poor condition, of the roads.

He disclosed that, despite being almost 115 years, the Mangoase township is yet to see a single tarred road.

A retiree, Mr Saakwa noted that the best he has seen is the grading of the roads by a Philanthropist, who is a medical doctor at the Nsawam General Hospital, Dr Saakwa.

He further disclosed that the doctor has been helpful when it comes to the grading of the roads anytime they deteriorate.

Speaking on the Ghana Yensom show, hosted by Odehyieba Kofi Essuman on Accra 100.5 FM, Thursday, December 8, 2022, to pour out their frustrations about the state of the roads in the Mangoase area, Mr Saakwa, said aside the bad roads in the area, they do not have potable water even though they are under a municipality.

He said no government has come to the aid of the area except promises by politicians that have not materialised.

“The Mangoase bad road is always the campaign message of the politician since the days of the Progressive People’s Party (PPP).”

He bemoaned the level of political deceit in the area.

“Members of Parliament have come and gone and the state of the roads remain the same,” he explained.

The Assemblyman for Old Mangoase Electoral area, Seth Kwame Appiah, explained that the neglect of  the roads in the area, has not been intentional.

He indicated that plans are underway to have the roads repaired to bring some respite to the residents.

He said the Assembly has detailed a contractor by the name of Paa Kwesi to come to the site.

Mr Appiah gave the assurance that his office is collaborating with the Assembly to build the roads.

He further assured that the contractor will come to the site by next week.

He added that the delays in having the contractor come to the site were a result of some issues with his equipment.